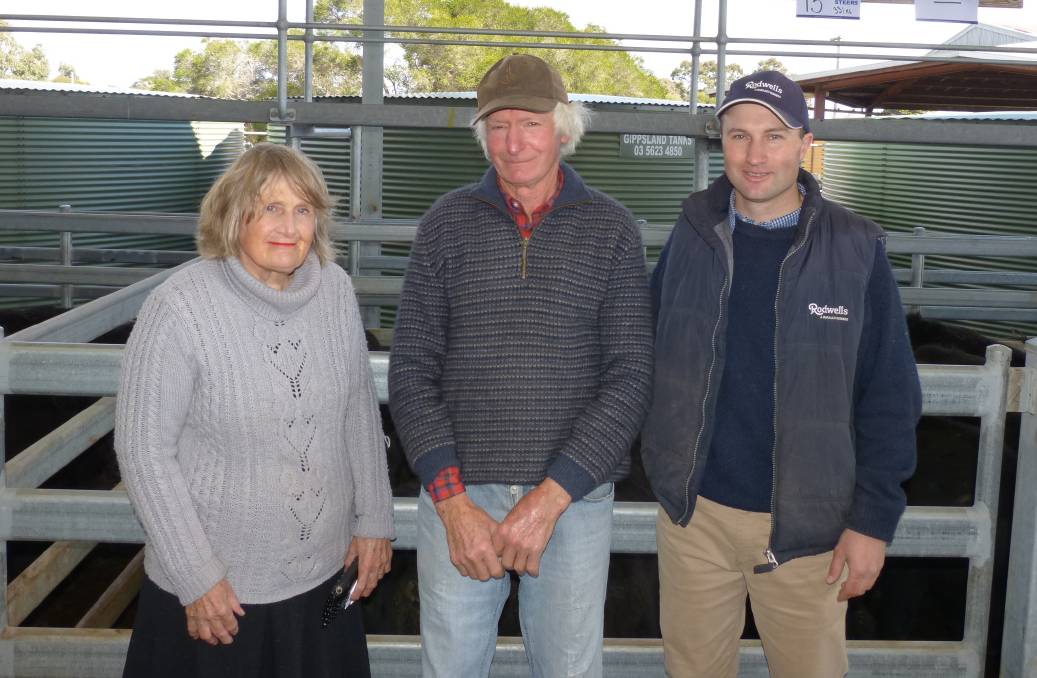 FIRST TIME MEETING: Rodwells Sale guest auctioneer Anthony Delaney met Geoff and Elizabeth Bates at the Sale store market. Mr Delaney has been selling their cattle for some time but had not met them before.

Demand was softer at Sale for a very mixed offering

However, except for one large draft of steers and heifers, the balance of the yarding was very mixed, with breeding, quality and weight compromised throughout the market.

Seasonal conditions in this part of Gippsland have been very poor for over 12 months, and many of the producers have already sold their 2017 spring-drop calves.

This has left numerous producers now selling their remaining calves, or second or third drafts of cattle.

Many of the cattle were in plain to poor condition.

A very large crowd attended, although most were only looking and this left a smaller field of buyers who showed less enthusiasm for cattle.

The estate of AA and FE Birss offered a pen of two year-old Hereford steers, which sold for $1540 a head, equaling 282 cents a kilogram liveweight. This was a firm sale compared to three weeks ago. Geoff and Elizabeth Bates offered the one feature line of Angus steers and heifers.

Rain has eluded their Maidavale property for many months, and they would not normally sell these cattle this early.

Selling 128 well-bred Angus steers in a sale of 911 head, that was very mixed and plain, should have aided a solid result.

While they did sell to feedlot and producer competition, prices could have been higher.

The lightest pen weighed 293 kilograms liveweight with all others weighing from 311-364kg.

Some single pen sales of Angus and Hereford steers steers made over $900.

Coming from Cann River, and obviously falling on hard times was Hereford steers and heifers of N Ashlin. Their 18 steers were very plain and light, and sold for $300 and $310.

A small selection of crossbred steers and heifers were offered, which generally sold poorly. Steers sold from $320-$605 with two older steers to $910.

Cows and calves generally sold at recent price levels, which are only just okay.

M Watts sold three South Devon cross cows with calves six months at foot. These were in good condition and sold for $1580.