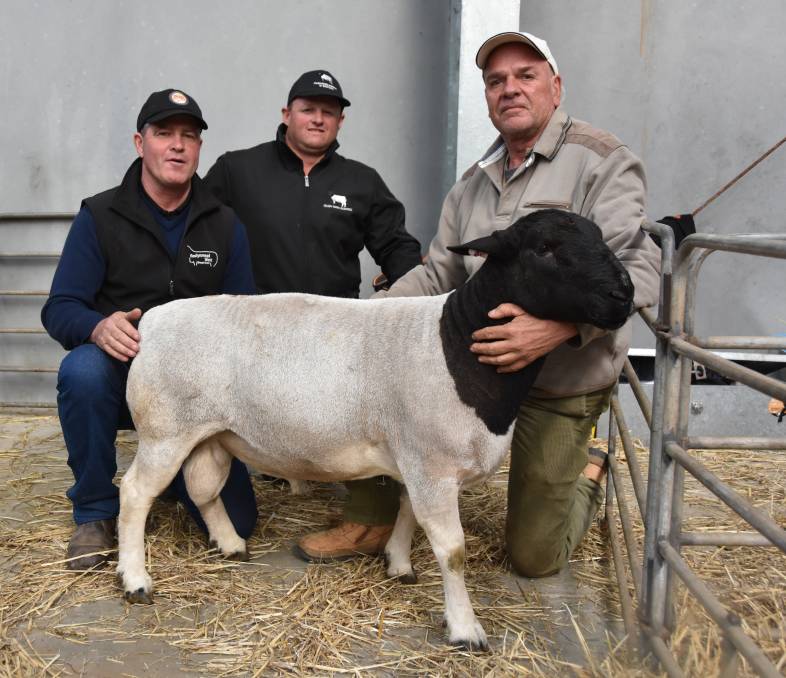 Landmark’s Tim Woodham, Wagga Wagga, said agents were concerned at how the sale would go, after several volume buyers indicated they weren’t attending.

“Considering the season the end result was quite positive,” Mr Woodham said.

He said the sale was buoyed by several buyers, who took more than one ram.

“They chipped in - sure they didn’t have to pay a lot, but the quality was really good.

“He is bred so well,” Mr Teskera said.

“The mother of this particular young ram is an outstanding ewe, who has produced in her own right,” Mr Teskera said.

“There’s a lot of depth in the pedigree, so we had a lot of confidence to go ahead and buy him.”

The Type Five ram weighed 101kilograms and had figures of a 6.5mm fat depth, and 42mm eye muscle depth.

Mr Teskera said he thought there would be quality rams at the sale and he was in the market.

“I did the inspections on Friday and had him in the ring, first hand, and I really like the way he moved and the way he is put together.”

The ram “exuded quality” when he walked around the ring.

“He has a great, masculine head, a beautiful body and is so well put together,” Mr Teskera said.

“He just moved like he was on an elevator, so fluidly.”

He just moved like he was on an elevator, so fluidly. - Danny Teskera, Rosylnmead West sheep studs

He said the ram would be the stud’s main sire for the upcoming breeding season.

Sponsored by
Rise in demand for grass-fed Tassie lamb.
Test
The WVLX at Mortlake has grown with plans for new ventures in the pipeline.
Test
After establishing five years ago, Whiteline Speckle Park has continued to grow its herd.
Test
Turning off six to seven month old weaners is paying dividends.
Test
A large penning of 3591 cattle at Mortlake was soaked up at strong prices by a large gallery of buyers,
Test
Good prices continue as agents yard 4000.
Test
Little relief from coming heatwave until early next week.
Test
Redgums stud on a mission to promote the Red Angus breed.
Test