Bron and Leigh Ellis made it a hattrick when their Sweetfield stud won the National Corriedale Pair competition for the third year running. 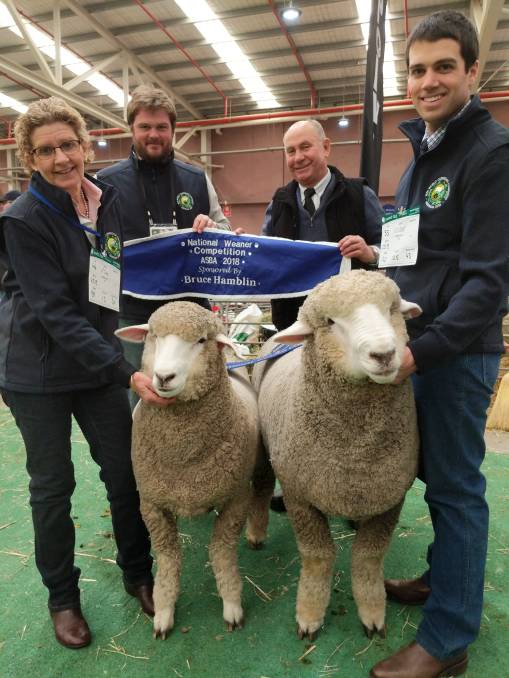 Bron and Leigh Ellis made it a hattrick when their Sweetfield stud won the National Corriedale Pair competition for the third year running.

At just over one year-old, the ram and ewe were selected at the Australian Sheep and Wool Show in Bendigo by international judge Bill Prime, a Corriedale breeder from Peru.

Both animals were by a Croydon ram that also sired Sweetfield’s supreme champion ram from the same show last year.

The ram in the pair weighed 120 kilograms, had a muscle depth of 43 millimetres, fat cover of 12.5mm and was wearing a fleece of 25.8 micron.

Mr Prime, a third generation Corriedale breeder visiting for the breed’s world congress, commended the length of the sheep, the denseness of their fleeces and whiteness of wool.

He said in Peru, 2.5 million of the country’s six million sheep were Corriedale, and they were looking for a sheep similar to that in the winning pair – open faces, clean ears, white dense wool, and good feet.

“In Peru we breed sheep in high altitude, which means fine wool because of the natural grass they eat – I have ewes at 24 micron and rams at 27-28 micron,” he said.

“But the prices are still poor because the market is a monopoly and most breeders only have small numbers.”

Ms Ellis and her son Leigh, of Mount Moriac, selected the pair to put forward for their soft handling fleece and finer micron.