With just 315 breeding ewes left in the Australia, the Dorset Down is one of the rarer breeds on show at this year’s Australian Sheep and Wool Show. 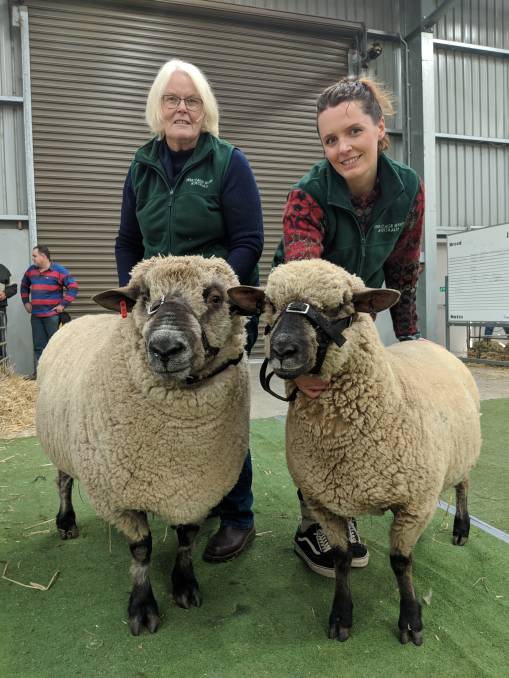 Margaret and Julia Chapman of Woodhall stud at Wedderburn with their grand champion Dorset Down ram and ewe.

With just 315 breeding ewes left in the Australia, the Dorset Down is one of the rarer breeds on show at this year’s Australian Sheep and Wool Show.

But New Zealand judge Pam Tait said they were still a popular mutton breed across the ditch, having used them herself over Romneys

“The breed has a good length of loin which points to good quality, and they are also a quiet sheep – easy on the fences,” Ms Tait said.

Ms Tait was a long time English Leicester breeder at Ashburton on the South Island, and said while lamb prices had been good the past months, strong wool returns were not.

“Wool has been the poor cousin in the lamb industry in New Zealand recently, with fine wool prices humming along but much more marketing needed for strong wool.”

Colin and Margaret Chapman, Woodhall stud, Wedderburn, have the oldest ongoing Dorset Down stud in Australia, and exhibited grand champion ram and ewe at during the judging at Bendigo on Friday.

Ms Chapman’s father imported the breed into Australia from the United Kingdom, and the family has been breeding them since 1995.

The rising four year-old champion ram was no stranger to a broad ribbon, having won the same accolade last year, and commended by the judge for its style and shape.

The ewe, at one and a half years, was one of many of the Chapman’s stud ewes to be expecting a lamb by the champion ram in the next month.

Ms Chapman said the lambing ease and early growth made the breed good sires for Corriedale, first-cross and Merino flocks.