Wellington farmer says his main priority is to keep his stock alive. 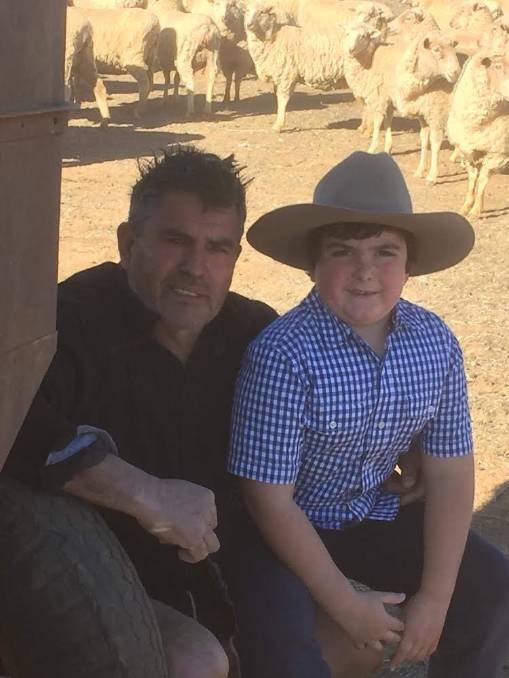 Brian Giddings with his son Fletcher. They have been supplementary feeding their stock since March 2017.

A fifth generation farmer, he has hand fed stock with his father and grandfather, but said this drought easily ranks as the toughest yet.

They have been supplement feeding since March 2017 with one month off in December.

The last decent fall of rain was in October when they received 30 millimetres. Since then they have measured just 22.6mm.

Mr Giddings said without a crop last year they have had to draw on feed from interstate.

“We normally grow oats or barley and graze it with our sheep, then strip it and place it in the silos,” Mr Giddings said.

“But we didn’t even have a header come last year - there was nothing here to strip.”

He said they started drawing hay from Victoria three months ago, but the cost has now doubled.

But now, to add to their torment, ewes in their last month of pregnancy have been struck down with pregnancy toxaemia.

To date, the Giddings have lost about 60 ewes to the lambing sickness.

“We look after our stock and give them as much as we can - they are in good condition,” Mr Giddings said.

“I am giving them lupins everyday and hay every second day, plus supplements, but they are still going down.

“You can’t tell when they are sick - it happens very quickly.”

Mr Giddings’ ewes are normally joined at the end of September to lamb down in late February to target the sucker market.

But this year, because of the season, just 500 of their crossbred ewes went in lamb, and with some lambing out of season, the Giddings’ have ewes lambing now.

Pregnancy toxaemia, also known as lambing sickness or twin lamb disease, is caused by low levels of glucose in the blood.

According to NSW Department of Primary Industries Sheep Development Officer, Geoff Casburn, it is often associated with drought when pastures are clearly inadequate to meet the needs of a pregnant ewe.

He said it commonly occurs during the last month of pregnancy when there is a high demand for glucose from the rapidly growing foetuses.

“The level of glucose in the blood is directly related to amount and quality of the feed being digested and, at times, the requirement for glucose cannot be met from the diet alone and needs to be sourced from the ewe’s own reserves,” he said.

Mr Casburn said, during this process, fat was used as a major maternal energy source and ketones are produced as a consequence.

“The more fat used by the mum, the more ketones produced - ketones are used as an energy source by muscle in times of severe nutrient deficiency,” he said.

“Over a prolonged period of severe undernutrition, the level of ketones produced becomes toxic and this leads to a further fall in feed intake and, eventually, clinical signs of pregnancy toxaemia.”

There are three general scenarios that lead to pregnancy toxaemia: stress and fasting; over-fat ewes and inadequate pasture.

It can be triggered by stress resulting from unfamiliar locations, transport, cold wet weather, internal parasites and foot abscess or by fasting due to extended periods of handling (shearing).

Mr Casburn said, on their own, these practices generally don’t result in pregnancy toxaemia, as their impact on fat utilisation is often within acceptable limits.

However, when these circumstances coincide with prolonged malnutrition, it can be enough to ‘tip the balance’.

Mr Casburne said the Drought Feed Calculator app, which can be downloaded on smartphones, was an essential tool for livestock producers dealing with drought and dry seasons. “It enables busy farmers to make informed decisions and save money,” he said.

“Farmers can easily and quickly determine the minimum feed requirement for a range of animals with different nutritional needs.”

If you want to help

If you would like to support our Australian farmers, visit http://droughtangels.org.au and www.buyabale.com.au or join the Facebook group ‘One Day Closer to Rain’