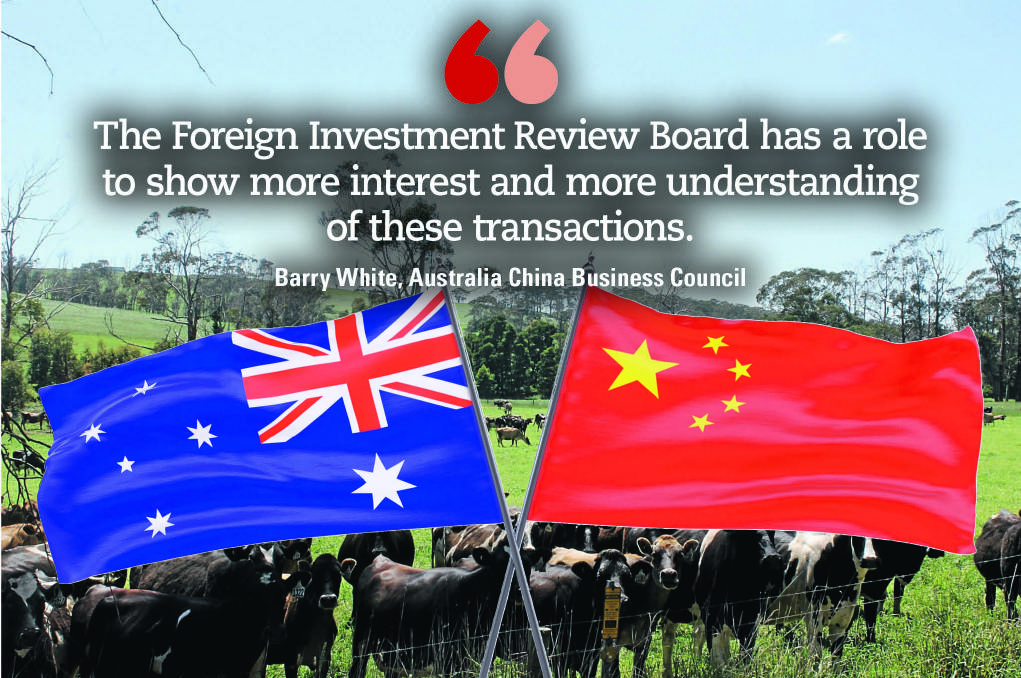 FIRB QUERY: Questions are being asked about the role of the Foreign Investment Review Board, after turmoil at Australia's biggest dairy farm, Tasmania's Moon Lake Investments.

China experts are questioning the role of the Foreign Investment Review Board, after troubles at Australia's biggest dairy.

In addition, the chief executive of Moon Lake's subsidiary company, Van Diemen’s Land Company, Evan Rolley will not extend his contract beyond June 30, this year.

Former Moon Lake deputy chairman Dr David Crean said the board resigned after Mr Lu rejected its advice on corporate governance and the need for millions of dollars in farm upgrades.

University of Tasmanian senior lecturer in Chinese studies, Dr Mark Harrison, said the issue raised questions about the role of the FIRB.

The board approved Moon Lake’s $280million purchase of VDL in 2016.

Dr Harrison said at the time of the purchase, Mr Lu had access to a large amount of credit, dairy consumption in China had increased sharply and there was a corresponding increase in prices.

“He was looking for overseas acquisitions, and this opportunity came up,” Dr Harrison said.

“But he made promises about investment and there are questions about the viability of that.”

He promised an additional $100 million investment, over five years, with the aim of increasing job numbers from 140 to 235.

Dr Harrison said there were also questions about jurisdiction when it came to foreign investment.

“What exactly is the remit of FIRB and the remit of the State government when these types of foreign investments impact upon local communities?

“It would seem to me there is a question about exactly how you get those systems to work better.”

Dr Harrison said the FIRB’s remit was relatively limited, looking only at the national interest.

And Australia China Business Council agribusiness and food chair Barry White said the troubles at Moon Lake “certainly raise a lot of question marks” about the role of the FIRB.

“We don’t want to make it so restrictive that we turn people away.

“But there has to be a balance.

“I think the FIRB does have a role to show more interest and more understanding of these transactions,” he said.

Mr White said the case highlighted concerns about the quality of due diligence, carried out by Chinese investors.

The price Mr Lu paid for VDL was “a big investment in anyone’s eyes”.

It would seem to me there is a question about exactly how you get those systems to work better. - Dr Mark Harrison, University of Tasmania

“A lack of familiarity with agricultural conditions and the market doesn’t help,” Mr White said.

“It was a huge investment and it does appear the true value of the business was not revealed.”

Mr White said there were many other examples of positive Chinese investment, where owners worked closely with local advisors and staff.

“We don’t want to tarnish all of them on the basis of what has been going on there,” he said.

He said the council tried to ensure Chinese investors did their homework.

“We can only rely on organisations like the FIRB to make sure the ‘t’s’ are crossed and ‘i’s’ dotted and companies meet all the obvious guidelines required of them.”

In February 2016, Treasurer Scott Morrison said the FIRB had agreed the sale was “in the national interest.”

He said Moon Lake had committed to undertake a number of investment projects in the VDL farms, which would provide additional economic activity to Tasmania.

“Based on upon Moon Lake’s estimates (that) will result in a near doubling of employment at VDL,” Mr Morrison said.

For the fourteen months, Moon Lake recorded revenue of $39.5 million.

It made $4.3 million in milk sales to Fonterra.

The head of the University of Sydney Business School’s China Research Network Hans Hendrischke said it appeared there had been a case of “total communication breakdown.

Mr Hendrischke said it appeared the Chinese investors didn’t want to listen to the company’s Australian management but the case appeared to be an isolated one.

“Chinese investors, particularly in agriculture, know they have to work with Australian management and they are doing that to an increasing extent,” Mr Hendrischke said.

Professor Hendrischke said the Chinese owner may have believed Australian management  was coming “with very big demands for investment and money.”

But it appeared Mr Lu was looking at adding value to dairy products, rather than considering the day-to-day on-farm operations.

The FIRB has been contacted for comment but officials had not responded by the time of publication.