Win Mapley, Eurobin, was awarded a prize for the most improved herd, at the Paull&Scollard sale, Myrtleford, Friday. Win was congratulated by Colin Armstrong.

Myrtleford and surrounds is the last bastion of reasonable grass in Victroia, and this yarding was all in good condition.

Paull&Scollard held their annual Myrtleford calf sale, Frdiay, and their offering of 1825 steers and heifers were all in good condition.

Myrtleford still stands in good stead for grass, and many of the regular buyers attended, but feedlot buyers, and Landmark International, put a solid floor in the sale for the heavier Angus steers. 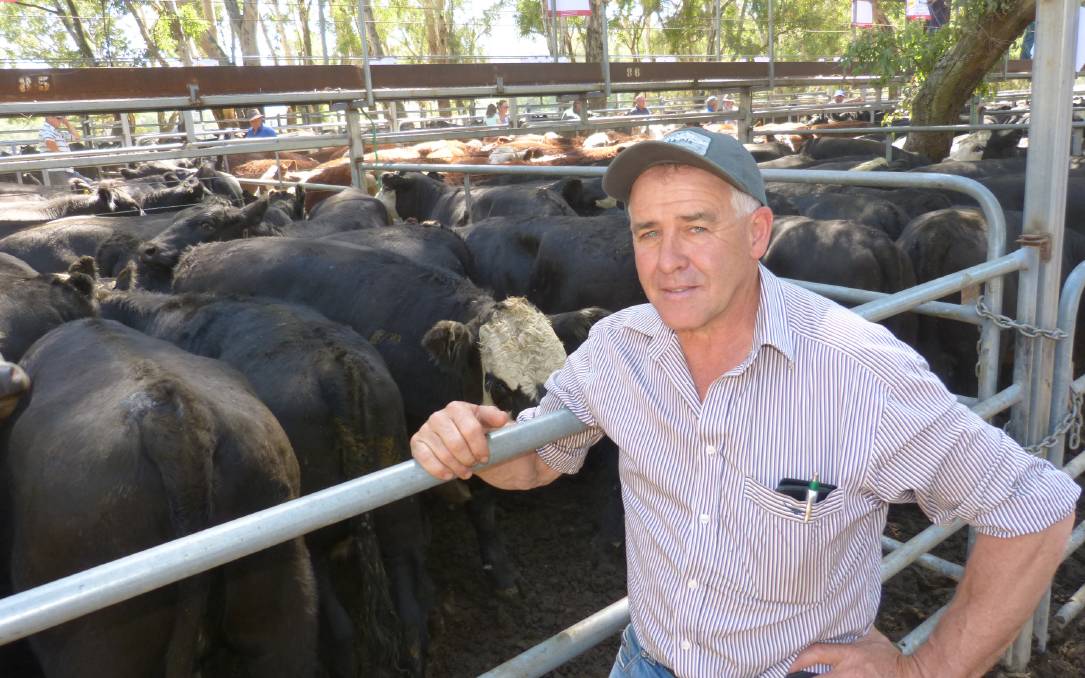 There are cattle weighed here at this Myrtleford sale, but the age and quality of the steers sold themselves.

Many of the first pens were purchased for grain feeding, which was backed up by a live export order.

JB Fraser, Harrietville, sold the top price pen of steers, which were judged to weigh 405 kilograms.

The top pen of Hereford steers sold for $1210, and were part of a mixed breed consignment offered by Masterson Brothers of Buffalo River.

Paull&Scollard’s, Dan Ivone, gave a short opening speech, which include a prize for the most improved herd, which was won by Win Mapley, Eurobin.

Her 56 Angus steers sold from $1030&$1100, and the small difference between top and bottom price, outlines the strength of demand for lighter weight calves.

Young steer calves sold from $815-$1030, with competition driven in part by feedlot buyers taking many of the top weight pens.

Not all cattle are born on the same day. Vallunga Pty Ltd, Buckland Valley, sold 47 younger Hereford, and Angus-Hereford calves from $815-$1040.

Alpine Angus Stud was noted on many of the pen cards, and they offered prizes for certain achievements in the sale.

Overall the Angus breed was dominant, and some Herefords still prevail.

While the smaller offering of heifers sold well, none sold over $975. However, many pens sold upward from $860, making a good average price on the day.

The top price here was achieved more than once, but a pen of Masterson Bros Hereford heifers topped the sale, making $975. Their 47 Angus-Hereford heifers sold for $920&$930.

With none of the cattle being weighed, estimates abounded. Steers were estimated making from 300-354c, and heifers between 265&320c/kg lwt.