Working as a market analyst, particularly one in agriculture, is something Olivia Agar had never considered before becoming one, but she's enjoying the challenge. 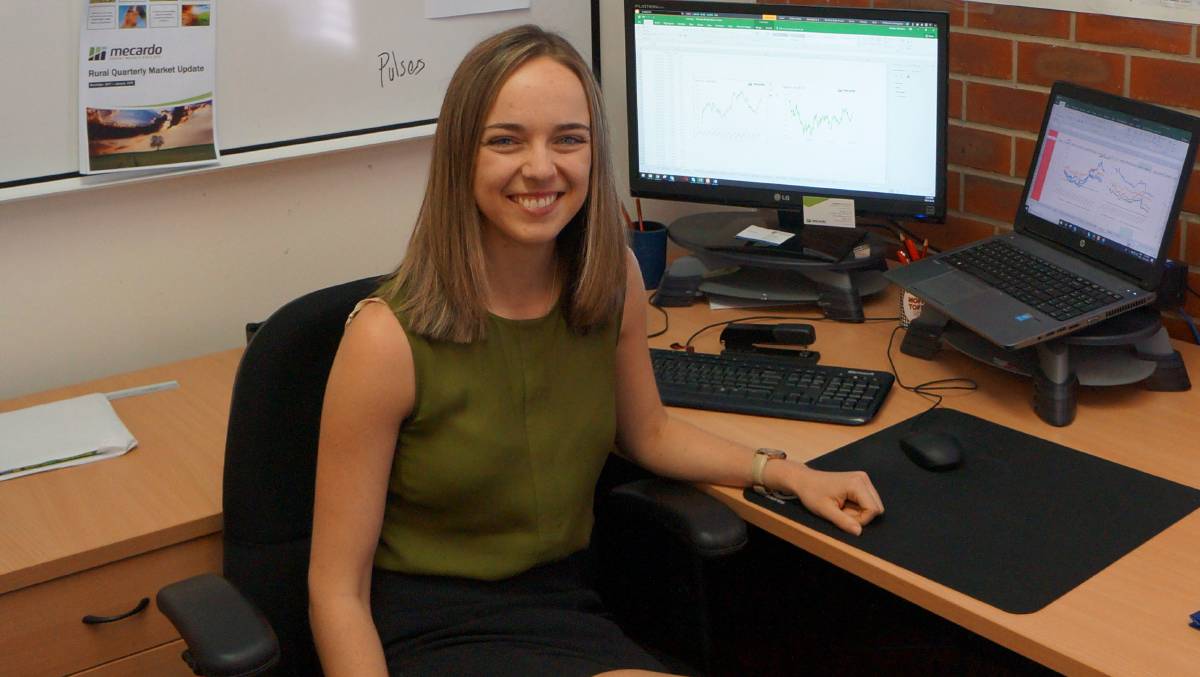 SHE doesn’t come from a farming background, but that’s never got in the way of Olivia Agar’s career in agriculture.

The 24 year-old was interested in technology and biology in high school, and had originally anticipated to follow a food science career pathway, until she came across an agriculture degree.

“I looked at food technology degrees, but thought they were too narrow, and found an agricultural science degree, where I could still major in food science if I wanted to, but was overall more broad,” Ms Agar said.

“At that point, I hadn’t even considered a career in agriculture, I have no family connections to farming, but as soon as I started studying it, I absolutely loved it.”

Having grown up in the suburbs of Sydney, she said the idea of a career in agriculture was appealing.

“It was a mix of all the things I like, there were aspects of food science, biology, commodity markets, and research, and it was nice knowing that you can actually see the output of what you’re doing,” she said.

Ms Agar completed many country placements during her university degree, and upon finishing, got a spot in Ruralco’s first graduate program.

“I started working with the procurement team, in the head office in Sydney, and then I did a short stint down in Mecardo at Ballarat, helping on one of their projects at the Geelong Saleyards,” she said.

“Then I headed up to Ayr, a town south of Townsville in Queensland, and worked with one of the stores in the Ruralco network, A&B Rural Supplies, as a horticultural agronomist servicing growers producing pumpkin, capsicum and watermelon.”

Not long after this, Ms Agar was offered a full-time position at Mecardo.

“This was really exciting, because when I was down there, I enjoyed the work so much, it wasn’t something I considered doing beforehand, but it was a really good fit.”

Accepting this position meant she had to relocate interstate to Ballarat.

“I had done it before during my stint at Ayr, and I’d been out and about for most of the year before, but I didn’t know anyone in Ballarat, so it was a big move, but I’m really loving it,” she said.

She said her role at Mecardo is a “mixed bag”.

“A lot of what I cover is project consultancy work, which can be for some of the big peak bodies in ag, Meat & Livestock Australia, or even for the local government,” she said.

“I’ve helped on a fair few projects, doing a lot of coordinating and research, as well as some of the day to day market analytics and commentary.”

Ms Agar is now confident working in the agriculture industry, but reminisces on beginning to study an industry she knew nothing about.

“It was definitely hard to start with, sitting in a classroom with a lot of other students who had been born and bred into the industry, whereas I was coming in with no idea of even the basic terminology they were using,” she said.

“But once I got into it, I found everyone was very open and willing to give me their time.”

She said she looks forward to a career in the industry.

“I really love the project work, there’s a lot of diversity in it, which is what I like,” she said.