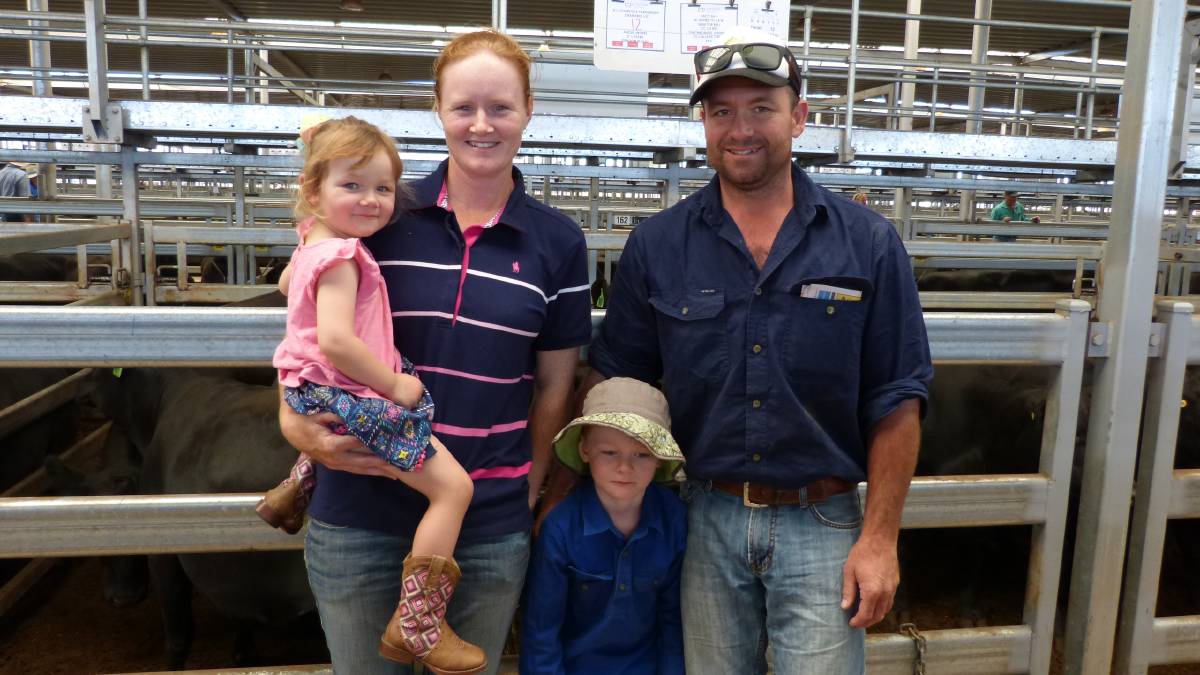 Many pens of good to very good quality heifers and calves, and PTIC heifers, weighed in excess of 600 kilograms liveweight, and their breeding was excellent too.

However, it was not all beer and skittles, as some cattle were plainer, depending on the kind of season they have had.

But there was one comment that had to be made, and that was the difference between the Angus and Hereford breeds.

It was very disappointing to experience the lack of competition for the Hereford breed, which was not created by any lack of quality.

Competition came from local and surrounding districts, and it was best for many of the Angus heifers and calves, and the good quality heifers.

Selling through Corcoran Parker, first of the rank was Diamond Livestock, Emu Plains, selling Angus heifers and calves from $2440-$2800.

This very strong competition set a trend for much of the sale. The penning of the yarding was different with some Angus heifers and calves sold early, followed by a magnifecent run of PTIC heifers.

Yarding 1992-head, which included 442 heifers, and cows and calves, left around 1400 joined females, and only a small offering of unjoined heifers.

Most of the early sales of heifers and calves were between $2200 and the top price.

Later in the sale, other breeds were offered.

Tarcoola Grazing, “Tarcoola”, Mountain Creek, sold 37 Hereford heifers, 2.5 years, and re-depastured to same bulls, but these only sold from $1580-$1660, if the auctioneer accepted the top bid for the first pen.

Moving onto Angus-Hereford females and calves, lifted competition, and JW Culcairn, Mansfield, sold 18 heifers and calves for $2440, only adding insult to injury.

Toward the end of the sale, several pens of cows and calves were offered, in varying condition, and of varying age. Most of these sold from $1400-$2100.

What helped make the sale was the Angus heifers, mostly 2.5 years, joined to numerous bulls from local and district studs.

Top of the sale was MJ Garvey, Mansfield, selling 130 Angus heifers PTIC to calve early February on, which weighed 575-677kgs. These sold to very strong competition, selling from $2070-$2800.

Some other larger lines are well worth mentioning. Charlock Partnership, Charleroi, who sold the top F1 heifers the day before, sold 100 Angus heifers, 2.5 years, PTIC to Table Top, Dunoon, Tulagi, and Reiland Angus bulls, from, $2020-$2320.

There are many examples of solid sales throughout the sale, but Joyce McConnell, Emu Park, Deniliquin, was disappointed with the sale of their 102 EU accredited Hereford heifers. Although they were younger, at 16-17 months, one could not fault their quality. Selling from $970-$1300 was sad.

However, they were not due to calve to Yarram Park bulls, until July-August.