A WORLD record was set for a Speckle Park female at the ‘Specktacular Sale’, held after the breed’s first feature showing at the Royal Melbourne Show.

A WORLD record was set for a Speckle Park female at the ‘Specktacular Sale’, held after the breed’s first feature showing at the Royal Melbourne Show.

After frenzied bidding, Six Star G61 Tammy M6 was knocked down for $31,000 to Peter and Roz Alexander, directors of the Hidden Valley Speckle Park operation.

It was the first female offered from Greg Ebbeck and Tim Bell’s Six Star Speckle Park stud, Glenquarry, NSW, and the first Six Star Rare Commodity G61 progeny to be offered at auction.

“I was blown away – we were expecting she’d make good money, but this was beyond our expectations,” Mr Ebbeck said.

“One of the things we found out afterwards were there were nine under-bidders, of which two were from Canada, and they were the last to bid before the buyer.” 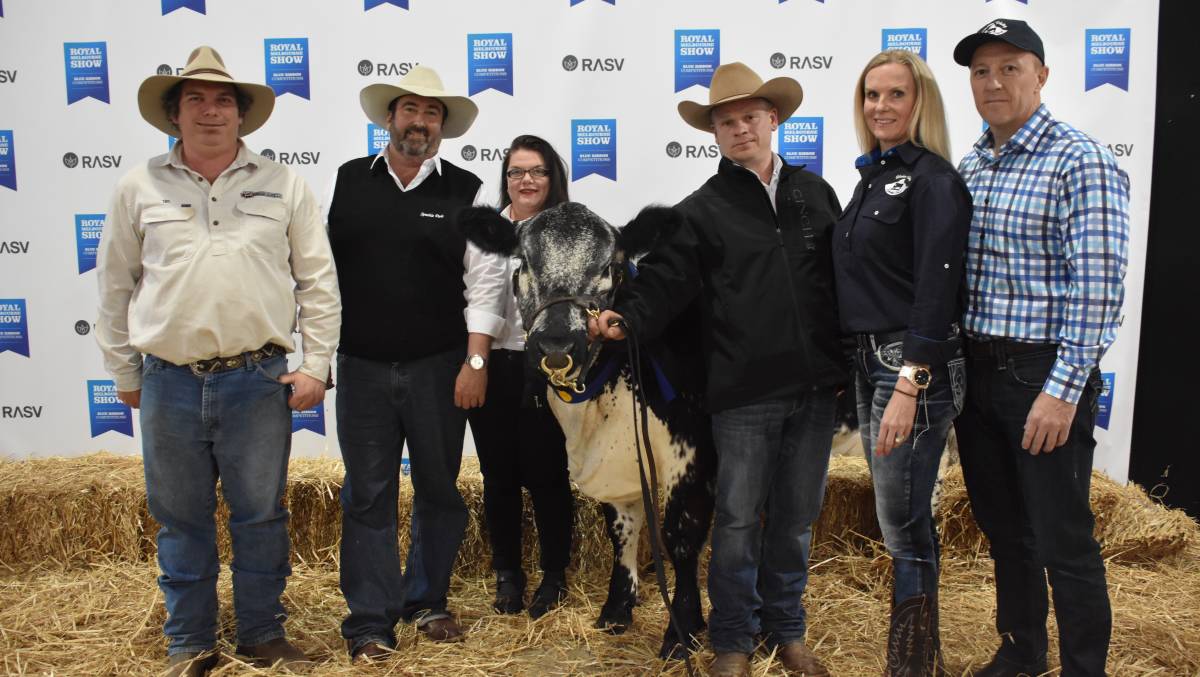 Sale co-ordinator Sam Nelson confirmed the Canadian buyers were bidding over the phone.

Mr Ebbeck said she was very complete and a typical Rare Commodity offspring, with a beautiful disposition, deep body and “really broody” which he said would mean she’d become a very good cow.

Buyers Mr and Mrs Alexander are confident that will be the case. The heifer is the first purchase they’ve made from the Six Star stud.

They, with their three children, have lived and worked in Singapore for 16 years and are working with Mr Alexander’s sister and brother-in-law, Louise and Craig Parker, to establish a farming operation that they will be able to move back to in about four years’ time.

The Parkers, with their son Josh, are responsible for the day to day running of Hidden Valley Speckle Park’s properties at Dungay Creek and Kyogle, in northern NSW. It has a growing stud and commercial operation that will produce premium grass-fed beef cattle. The Hidden Valley Speckle Park stud was established in May of this year, when the family bought three foundation females at the Scone, NSW, sale. They plan to expand the stud with the total of three females at Saturday evening’s sale at the Melbourne Showgrounds, and will do a recipient program at the end of the month.

Mr Alexander said about 12 months ago, he’d watched a television program about the breed and was impressed by its carcase attributes and docility.

Mr Alexander said he thought Six Star Tammy would be “fundamental with what we’re trying to do with the breed.”

He said she was a daughter of the “awesome” Six Star Rare Commodity and had the correct, square structure, balance and temperament that would be assets to the breeding program.

They also liked that she had not been fed up too much on grain, because they believe the health benefits to the animals and consumers of grass-fed programs are enormously important.

They will grow the heifer out and join her when she’s about three years old, as Mr Alexander said they wanted to have the best opportunities to produce better calves.

Six Star also had the top-priced bull of the sale, Six Star Wombat – who was also sired by Six Star Rare Commodity G61. Wombat has been champion at numerous shows throughout the country and the team at Six Star said he has carcase and maternal excellence in one package.

It was sold to another new buyer, Peter and Debbie Colley, Greenhaven Pastoral Company, Mitchells Island, NSW, for $22,000.

The Colley family bought the farm 12 months ago and have since establish the stud. They are keen to build on the 12 purebred cows they have at the moment.

They said they were particularly keen on the bull’s sire and plan to use the bull in their growing stud and market semen and embryos from him​.

This year it came second in its class – to another of their Rare Commodity sons. Mr Ebbeck said the top-priced bull displayed overall thickness with beautiful feet and structure. It weighed 930kg and scanned 124sqcm EMA and 23mm fat on rib and 13mm on rib.

“The Speckles are very popular and the cattle that were presented were very, very good and it was a unique opportunity.”

The genetic packages also sold to strong competition, with semen lots selling for $100 to a whopping $340 a straw for 10 straws of Australian record top-priced bull Minnamurra Leander L81. A package of four frozen, a-grade embryos from the joining of JSF Unmarked 2B and Almarlea Lacey 61Y K23 sold to an online buyer for $2100.

Mr Nelson said 10 cattle went to northern NSW and southern Queensland and a couple of local breeders bought a few each.