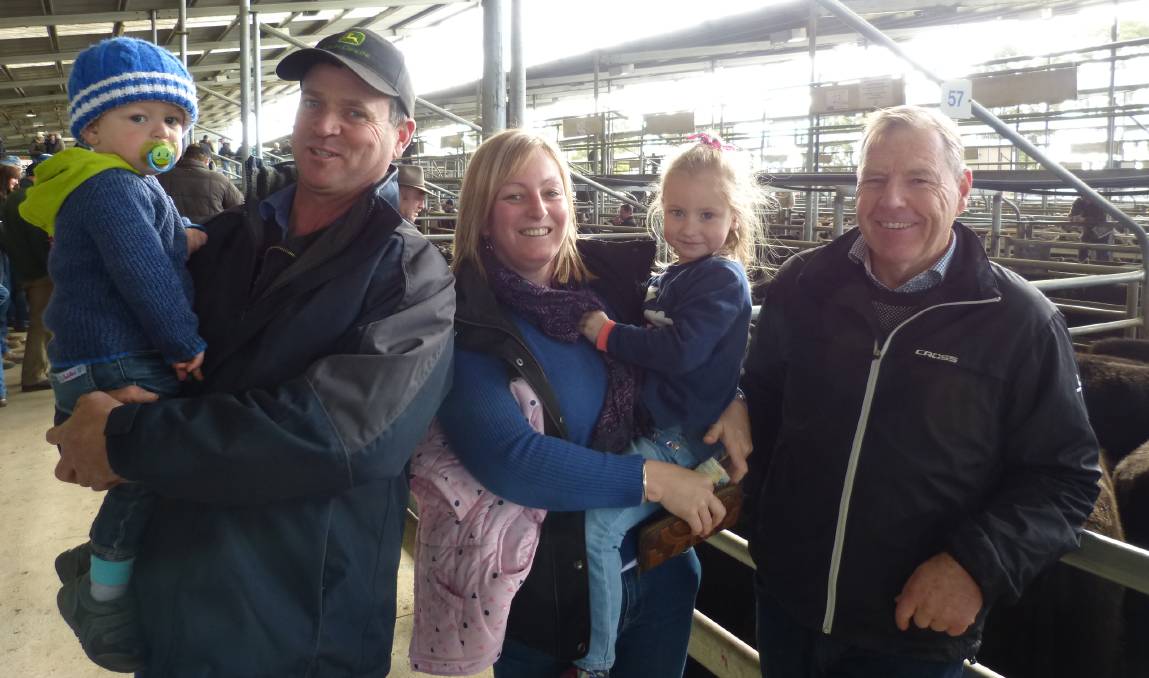 L_R Charlie, Richard, Eli &Grace McAuliffe, and Bryan Hayden, owner of Buchan Station, had one of the better sales at Bill Windham & Co, annual spring sale, Tuesday. Their steers sold to $1220, and yearling heifers for $1300.

Some older and young cattle felt the effects of the current fat cattle prices and were cheaper, others sold quite well.

Bairnsdale was the place, and Bill Wyndham & Co was the agent, for Tuesday’s annual spring cattle sale.

Because of the poor season, several high country producers sold their yearling steers, offering a larger than normal penning.

Despite the poor season, the yarding was the best seen for many months, at Bairnsdale, and elsewhere

In total, there was a large penning of 2545 steers and heifers sold to a very large crowd. Buyers came from as far afield as Mt Gambier, in South Australia, and two from the Western District.

If it was not for their added competition, some results could be a lot different.

Bullock fatteners were very wary of what they paid after much cheaper prices at Monday’s fat cattle sales.

Going into the spring, these steers were very good buying. A good season will see these steers add weight and be gone before the autumn.

In contrast, competition for the best bred weaned steers was very good. Buyers picking their proffered best breeders, paid between 370&414c/kg lwt for these.

There was a distinct preference for the Angus breed, which is not always the case. Top of the Hereford steers was CD&JA Cooper, Wulgulmerang, selling 54 Hereford steers from $1160-$1320.

A very noticeable difference at this sale was the lack of interest in the younger, lighter weight, and plain condition steers, that will be a longer term project.

A similar scenario can be told in the sale of heifers.

Breeders buying heifers to join paid a premium on the day, but prices here were only just firm on some other sales.

P&K Geehman sold 19 yearling Hereford heifers for $750, which was a bargain for the purchaser.

The Hurley Family Partnership sold 106 Angus heifers from $730-$880 with many of these, and many other younger heifers, going to Mt Gambier, equaling liveweight prices of 285-305c/kg.

A big difference in this sale was the prices paid for younger and plain condition heifers. Selling from $500 and up, many sales were noted equaling only 228-265c/kg lwt.

One producer said that his heifers were up to $500 cheaper than 2016, when this sale here was at the very peak of prices.