RAINFALL is likely to ease towards the end of the week, after what’s already been the state’s wettest April since 2001.

VICTORIA’S farmers are celebrating after what has already been the state’s wettest April since 2001.

Bureau of Meteorology (BoM) senior forecaster Scott Williams said most parts of the state had received double to triple the average amount of rainfall in April.

“On Friday, we had pretty substantial rain right throughout north-west and western Victoria, with totals above 50 millimetres, and one report of 103mm in Woomelang.

Sometimes we get a false autumn break, you get some rain, and then it gets hot afterwards, but this was a definite autumn break. - Sea Lake grower Nic Harrison

“In terms of the event that is underway at the moment, we’re seeing pretty substantial rainfall through central Victoria, particularly in Geelong, Melbourne, and east of Melbourne, up into the east of the state.”

He said these conditions will ease over the next few days.

“It’s still occurring, and there’s still a bit more to come,” he said.

“But rainfall is expected to move away pretty quickly, and be replaced by some showery conditions for the rest of the week and into the weekend.”

But he said the cold conditions would remain over the next few days.

“Temperatures on Thursday will be five to seven degrees below the April average, right across the state,” he said.

“The coldest air will move away tomorrow, and for the remainder of the month, temperatures will only be two to four degrees lower than the average, right through the state, including up into the northern areas.

He said, in his opinion, the autumn break had definitely arrived.

“It certainly has, and it’s not just been in Victoria, there’s been a lot of rain right throughout southern Australia,” he said.

Vectis, west of Horsham, cropper Vaughn Maroske has tipped 44mm out of the rain gauge in the past week, with 35mm on Thursday and 9mm on Monday.

Mr Maroske said it was an ideal break.

“It is nice and early, it will allow us to get a good knockdown and give the selective herbicides a break,” Mr Maroske said.

He said he planned to do some spraying before starting the cropping program some time early next week, and that the rain had calmed the nerves for Victorian farmers.

“Once we get a rain of this magnitude, we are reasonably well set up for the winter, we won’t need a lot of rain to keep things ticking along,” he said.

“Obviously we’ll need spring rain, but an early break gives the crop every chance, it allows them to use every drop of moisture.”

Sea Lake grower Nic Harrison said he’d received a “tremendous” amount of rainfall, in what had definitely been their autumn break.

“We’ve had exactly 75mm since the weekend, there was 12mm on Sunday, and then 50mm on Monday, and we even got another 12mm on Tuesday,” Mr Harrison said.

“Sometimes we get a false autumn break, you get some rain, and then it gets hot afterwards, but this was a definite autumn break.”

He said the rain had put their sowing plans on hold.

“We were just about ready to start sowing our winter crops, but then we got all of this rain,” he said.

“We’ll just wait for it to dry up in the next couple of days and then we’ll start.”

He said the grass was looking fantastic.

“The sheep pretty much had no feed, but within two days there was grass everywhere,” he said.

“It’s amazing how quickly it grows.”

Andrew McIntyre, East Wangaratta, said he received 21mm of rain on Tuesday, and an additional 12mm on Wednesday morning.

“We had a bit on Friday, about 13mm, but nothing over the weekend,” Mr McIntyre said.

He said it had been quite dry up until that point.

“I don’t think we’re at our autumn break yet, but we’re definitely close, and this will help,” he said.

“The grass is starting to colour up and show up.”

Colleen and David Gordon, Condah, said they had had a wet summer, but the recent rain was the most they had received in one hit.

“We got 20mm on Thursday, had a bit over the weekend and on Friday, and then since Monday have received 42mm,” Ms Gordon said.

“There’s a bit of run off at the minute, but it will dry up pretty quick.”

She said the sheep were looking nice and white, but weeds were beginning to grow. “As soon as it stops raining, we’ll go out and spray, and we’re hoping everything clears up by the time we start lambing in late May,” she said.

“Hopefully this will be the last big weather event for a little while.”

In west Gippsland, Glen Alvie farmer Neville Chapman was relieved that the break had finally come, but said it was a long time coming.

“The old adage is the first week of March was an early break, second and third weeks are normal, the last week of March is a late break, and we’re nearly into May,” Mr Chapman said.

“With two inches of rain, the grass goes green for two weeks, for a normal autumn break we’d need four to five.”

He received about 45mm on Monday, and an additional 15mm on Tuesday.

He said the grass had been struggling for some time, but was looking good now. 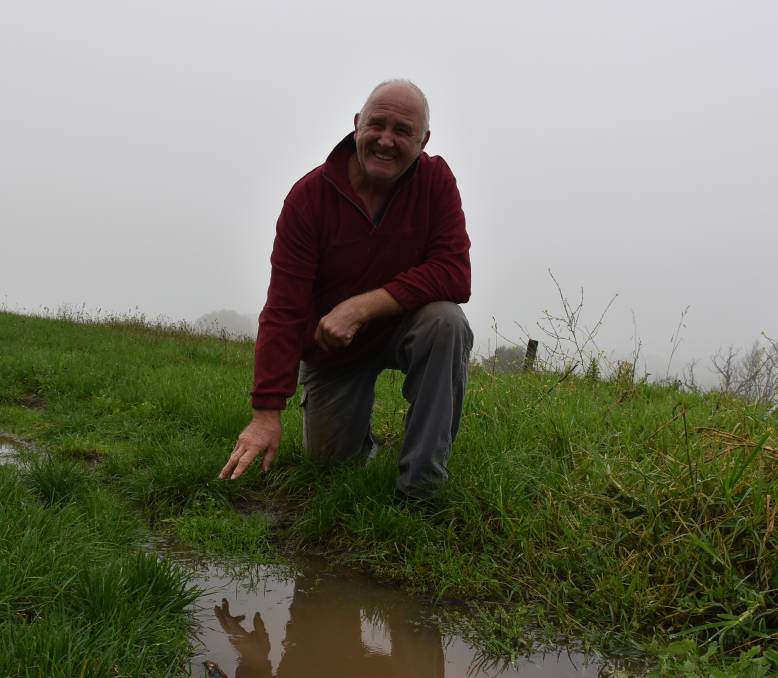