A Loddon Valley mixed farmer has claimed some primary producers could be worse off, under the Connections reset, than they were when it started.

A Loddon Valley mixed farmer has claimed some primary producers could be worse off, under the Connections reset, than they were when it started.

Durham Ox’s Chris Harrison, who grows crops and runs sheep, said he was concerned future costs for remote reading and operation of the new magflow meters could nearly double, in coming years. 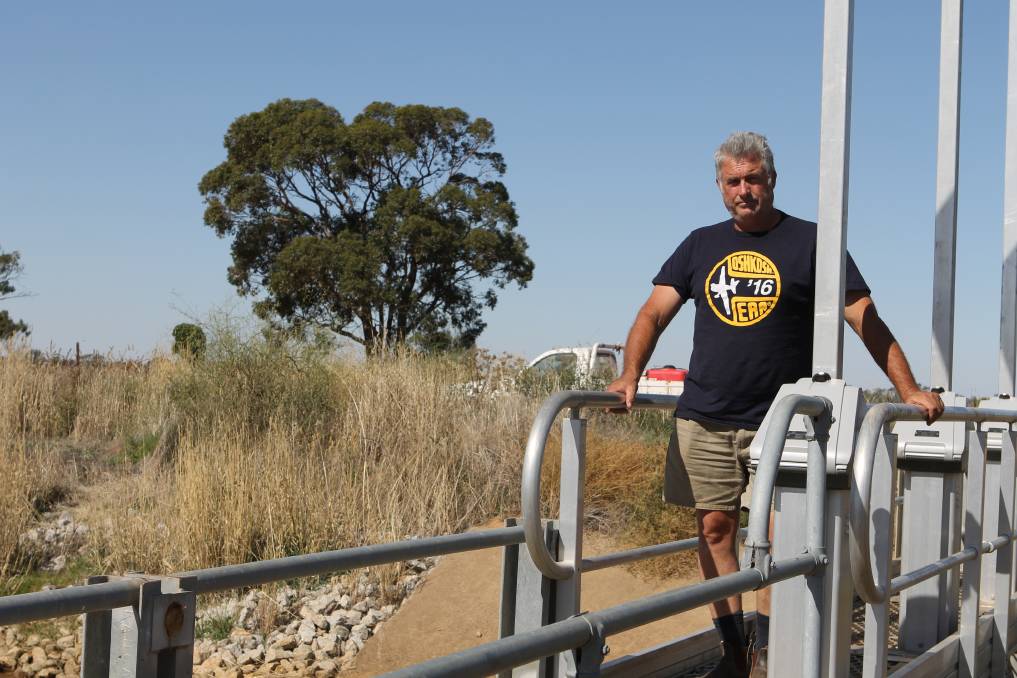 “I’m very disappointed in this reset, it’s now apparent many people on this reset will actually be worse off financially and in their supply,” Mr Harrison said.

“One of the opportunities with the two billion spend was to rationalise some assets, some channels and meter wheels, because the money is so thin, the amount of channels and wheels can’t be rationalised.”

Rationalisation meant GMW would have paid for the rebuilding of channels, before replacing the old Dethridge wheels with a magflow meter.

He cited Shepparton as an example of an increase in charges, due to the replacement of all the equipment in that area.

“Their costs are so much higher,” Mr Harrison said.

He questioned the reasoning behind replacing the old meters with new equipment, for small amounts of usage

“If the usage is above ten megalitres a year, which is very, very small, it is only a couple of dam fills, they will replace them.

“If they are below that, they will just leave the wheels there and grandfather them out.

“The other aspect is they will probably get a worse supply, some of these channels are very old, and by not rationalising spurs, there is a lost opportunity to get a better supply."

He said irrigators had been previously offered the opportunity to take over spur channels.

"When they had money, they could say, 'if you take over this channel, we will rebuild it and we will just put one meter at the top', and that’s rationalisation.

“The government has spent $2 billion, and at the end of that, you will have significant numbers of irrigators, who will be paying higher costs for their water, because of meters and charges, and a fair proportion of those people will have a poorer supply.”

He said he believed 41pc of Goulburn-Murray Water’s current meters were not being used.

“I believe 18pc of the new meters haven’t been used at all,” he said.

Planned water charges would not cover the cost of maintenance or renewal of the devices.

“A Dethridge wheel only costs $50-100 to maintain, someone can do it with a spanner and a couple of washers, whereas an electronic meter requires computers and any components that break down

Those irrigators who were still to be connected would face higher costs than properties which had initially been done under previous schemes.

“It’s like a Greek tragedy, they have poured all this money into it, and it’s just been wasted.”

Fernihurst sheep producer Adam Wright said the future price of equipment and water was not the only issue, facing Loddon irrigators. 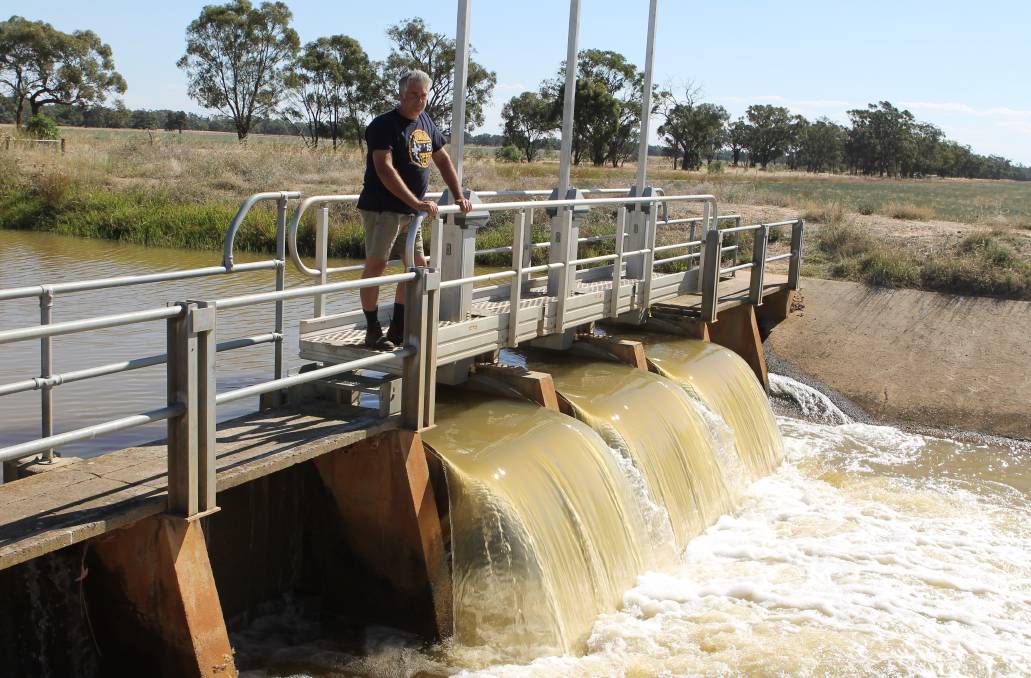 MAIN CHANNEL: Adam Wright, Fernihurst mixed farmer, said while water was flowing down the main channel now, once irrigators started to use the supply, it would drop dramatically. 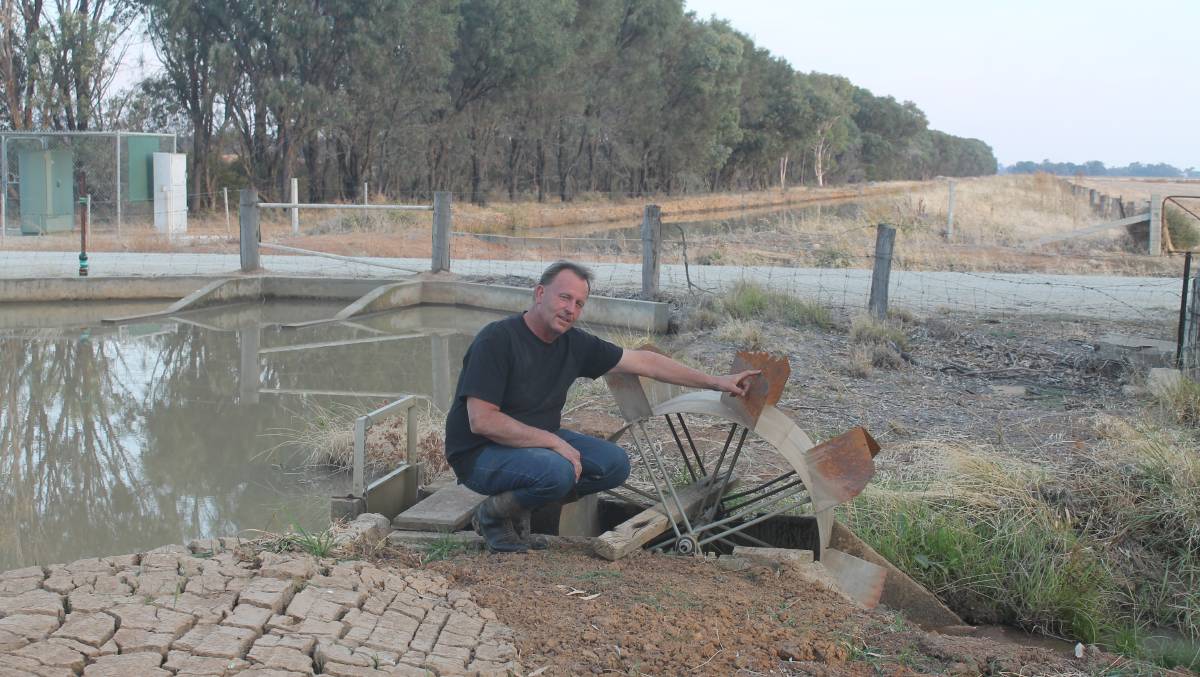 He has two outlets, on 200 hectares, using water on his barley stubbles. 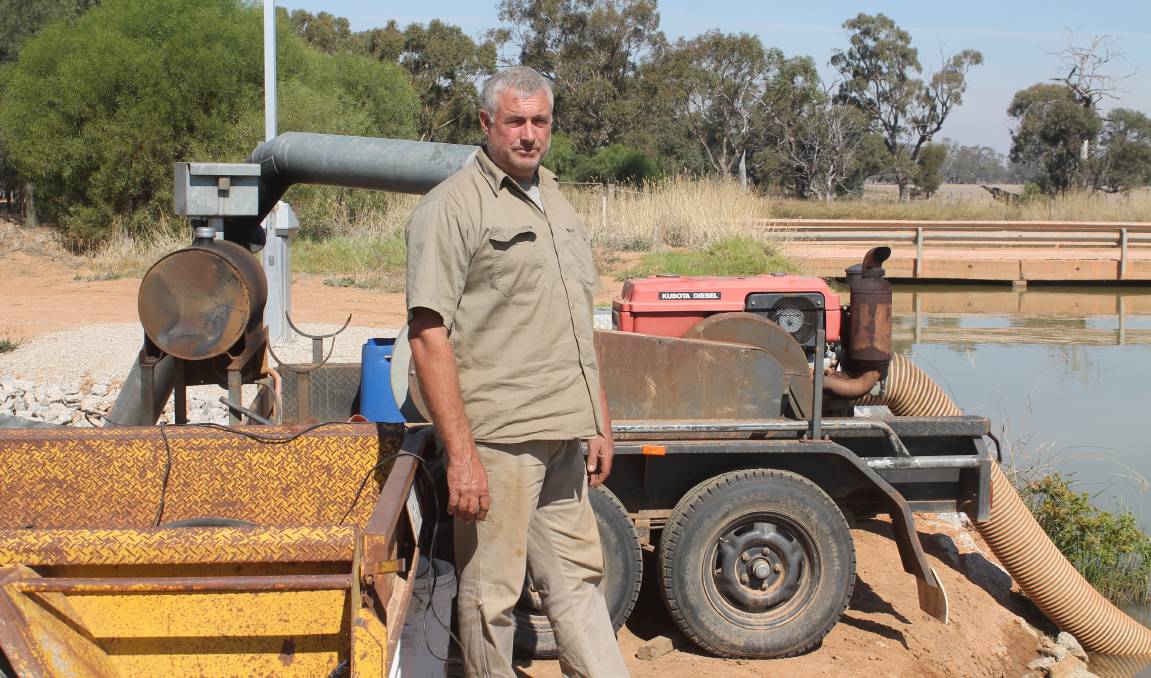 PUMPING SYSTEM: Adam Wright, with one of the pumps installed by Goulburn-Murray Water (GMW) for last season: he said he fully expected the same thing to happen again, this year.

Last year, unreliable water supply in the spur channel supplying his properties meant GMW had to put in a portable pump.

“To maintain supply, I expect them to put in a pump, as soon as put in my water order in – I will want eight to ten megalitres a day, for 16 days, to start the season off,” Mr Wright said.

“Over the last six years, we have had multiple breakdowns - once four pumps in a watering broke down, over a couple of weeks.

“The moment people downstream start to want to water, the same time everyone wants to water it just drops away, they can’t maintain supply.

“If I was the only one watering, it would be fine.”

“Now it’s all controlled from Tatura, and they send technicians to fix it when it breaks down, which is fairly regularly.”

“When the draw comes on, the multiple doors on the various regulators are continually chasing each other to ensure supply, and they fail to do so.

“My issue has been six years, don’t you think you could come up with a solution and solve the problem, and six years is beyond a joke.”

The failure to fix the problem meant irrigating became a “nightmare”, because farmers did not know what they would find.

“You have to rewater bays and there’s more water used than you would normally use,

“Even when the pump is in there you can’t rely on the pump to keep going you are second guessing it the whole time.”

Durham Ox mixed farmer Murray Haw said it appeared GMW had again fallen into the trap of failing to consult with farmers.

“In our case we have been waiting seven years, and now we have departments split between Connections and the reset managed by John Holland, so we will haven’t been able to progress any further,” Mr Haw said.

“We are still waiting, in limbo, like a lot of people are at the moment – we haven’t progressed.”

He said it now appeared there was going to be less rationalisation of channels and meters were just going to be replaced.

“That will mean a higher cost for GMW and irrigators, in the future.

Mr Haw said it was possible GMW could recover more water than they had originally planned, freeing up funding.

Fernihurst mixed farmer Ken Pattison said he was concerned at the cost of meters.

“They start at $31,000 and go from there, that’s where they are claiming their savings, but you’ve only got to use 10ML of water, which is ridiculous,” Mr Pattison said.

“The existing meters should be grandfathered, we have said that for about seven years, they don’t listen.”

“We had the most secure system in Australia, that is why everyone is preying on us, to buy so much water, and that’s why the Commonwealth came in and bought our water, because we had high security.”

“It took us four years to get a contract with Connections, that was 18 months ago, and still nothing has happened.”

“It’s not just about the works, we’ve been in limbo, in one of the key positions on this farm, where we know where this spur channel is going to go, but it’s still there and we can’t plan or do anything around it.”

“This thing has been gone over four or five times.”

He said he had not been personally contacted, even though he had offered a solution.

“We still can’t get a resolution, and we haven’t been approached or had it discussed, properly, with anyone.”

GMW Connections project control group chairman Mike Walsh a reset was intended to address all the issues, not just the complicated ones.

He described the previous engagement process as “crap.

“Virtually, there wasn’t an engagement process, it was crap,” Mr Walsh said.

“The pathway to complete all the work, is clear and our contracting approach is much more solid, than it was.”

Farmers who did not attend the forum also voiced concerns.

Kaarimba dairy farmer Mark Bryant said he was disappointed with the latest offer for one of his bocks, which was a seven megalitre (ML) flow.

“One wheel is going to stay the same and the other is not even mentioned,” Mr Bryant said.

“I am not sure what they are calling it now, it started off as modernisation, but I have lost track of how long ago that was.

“I’m just disappointed, everyone was going to be modernised and brought up to the 21st century, now we are not going to be; one wheel is going to stay the same, the other is not even mentioned.”

He said he had a small 140acre outblock, which hadn’t been used for five years.

“We had an offer on the table to dry it off, but it’s pointless in getting my laser bucket in there and spending sixty grand to upgrade it, if we were going to dry it off.

“Now they are using that against me, because I haven’t been using it – if they give me water, I will irrigate.”

Water minister Lisa Neville said she was disappointed there were still “legacy” issues, with Connections.

“This why we needed to reset; (Connections) goal is to try and fix those long term legacy issues, they have done about 106 now, and that’s touched 300 land owners.”

“This project is critical to this region and Victoria, and the changes are about trying to make sure we stop that.”

“I know people have been stuffed around for years, and its time we fixed it up.”