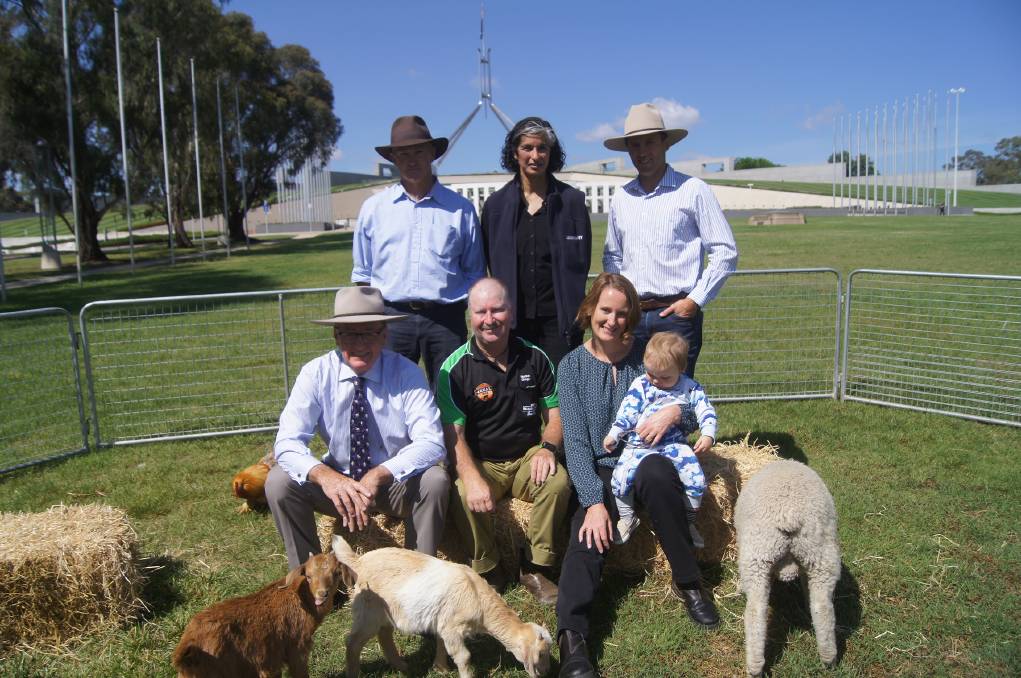 CLIMATE change remains a hot political topic but the science and need for policy action is more openly accepted in federal parliament than the general public may realise, a delegation of Australian farmers say.

CLIMATE change remains a hot political topic but the science and need for policy action is more openly accepted in federal parliament than the general public may realise, a delegation of Australian farmers say.

However, the six representatives from Farmers for Climate Action believe more must be done by the nation’s farming and political leaders, to address the growing, inherent risks of climate variability and affordable food production.

The survey was released to coincide with the group’s visit to Canberra this week where they met meet with federal politicians and farmer representatives.

It was promoted at field days, through the NFF website, more than 50 farming and agricultural networks and in rural media outlets and completed by 1338 farmers in different Australian states and territories from various commodity sectors.

It also said two thirds of the farmers surveyed had observed changes in rainfall patterns during their lifetime and almost half reported more frequent or intense droughts, rain events, flooding or heatwaves.

The survey also said many farmers were taking steps to cope like switching crop types or livestock breeds and adopting measures to reduce on-farm emissions – but cost was cited as the single biggest barrier to doing more.

The delegation presented the results to the NFF and various rural MP’s and agricultural or climate spokespeople for the major parties including Greens agriculture and rural affairs spokeswoman Senator Janet Rice.

West Australian merino wool and grains farmer Christie Kingston of Goomalling said she discovered during her Canberra tour that many politicians were actually on board, as were the NFF, and accepted the science of climate change and that it was having an effect on Australian farmers “right now”.

“It’s been really heartening to hear people saying this is real and we should be doing something about it,” she said.

“Even the very few who are a little bit sceptical say there are things that we can agree on like developing renewable energies.

“We’ve seen a lot of movement with people saying, ‘yes we agree with the science and something needs to be done’.”

Ms Kingston said her group wanted the government and politicians to reconsider about 1$ billion in funding that’s been cut from RD&E spending on agriculture and climate change programs.

“We need knowledge on the ground and we need support in making decisions on our farm for the short and long-term,” she said.

“I don’t know how we’re going to continue farming in WA at the rate we’re going.

“By 2090, a fifth of the days may be over 35 degrees at the current rate of emissions so we need to have that information so we can decide what’s best for our families and communities.”

Ms Kingston said it was heating up and drying out in southwest WA more quickly than other places in Australia and the trend was accelerating.

However, she said WA farmers had been incredibly adaptable and wanted to do more to make their farms more resilient and reduce emissions.

When she first moved to Goomalling about 12 years ago, Ms Kingston said half of the locals were climate sceptics and half accepted the science which was “understandable because we have famous climate variability in Australia”.

But she said that equation had now changed with nearly everyone she spoke to being more accepting of the science.

“The mood now is, ‘this is serious so let’s do something about it’,” she said.

Dairy farmer Karrinjeet Singh-Mahil, of Crossley in Victoria said there was vastly more support than her group thought there would be for their climate change concerns, in Canberra, but communication of those views could be improved.

“We need better messaging - forget the ideology - get out there and say ‘yes we accept there is change going on and that’s really challenging for our farmers and we need to provide some support but also get ahead of the problems and find solutions to the challenges’,” she said.

Peter Holding, a mixed crop and sheep farmer from Harden in NSW said Farmers for Climate Action wanted politicians to show more leadership on tackling climate change and cease “attacks” on research funding, especially to the Bureau of Meteorology and CSIRO.

Mr Holding said the biggest and current threat to his farming operation from climate change was late dry springs, where the temperature exceeded 28 degrees from the time his grain crop flowered, until the time the grain filled.

“Once wheat gets over that temperature it starts to cut yield and that’s basically why yields are lower in Australia than they are in Europe, for argument’s sake, although the soils are different,” he said.

NSW Liverpool Plains beef cattle farmer Derek Blomfied said anyone claiming to look out for the interests of rural and regional Australians should explain how they plan to lead the innovation required for food and farming into the future.

“A lot of farmers have been whispering about the changes they are seeing on their farms, but it’s time we started shouting as this spells trouble,” he said.

“What came out clearly in the survey is there’s a huge willingness among farmers to do more, but they need industry and government support to take the necessary steps.”

The survey also said eight in 10 farmers supported Australia moving towards 100pc renewable electricity, with only 10pc opposed and a further 10pc unsure.