WHILE the rest of Victoria watches rivers and towns flood, South and West Gippsland have had good rain, but less than the rest of the state.

The movement of cattle was unimpeded and Leongatha agents offered 1820 cattle from South, West and Central Gippsland districts. This market is becoming increasingly popular for cattle out of Central Gippsland, and this aided a very good quality yarding.

Landmark SGL, Leongatha, supplied more than half of the yarding, and this included numerous pens of heavier steers, 2-4 teeth. These sold solidly to bullock fatteners from $1650-$1940, to equal 340-385c/kg lwt.

Numerous people commented on the size of the crowd, which was the largest ever seen. Moving between pens was difficult, but buyers managed, and paid handsomely for the steers of younger age.

While prices were very good, there were still some highlights. Pilkington & Toohey, Sandy Point, sold 45 Angus steers, Yancowinna and Anvil blood, from $1150-$1400, which equalled 460-505c/kg lwt. The higher price was for steers weighing 277kg.

Mrs R Agostino, Nambrok, sent in 70 Angus and Angus-Hereford yearlings and one pen of Charolais steers. These sold from $1140, for a pen of lighter weight steers, to $1640. There was a small amount of feedlot competition, and some of these steers will be grain fattened.

Last year’s spring-drop calves sold extremely well with these steers selling to the best competition. Some said this market was even better than the previous sale here, two weeks ago.

While the crowd depleted when the heifers were sold, demand did not. Some heifers sold very well, while others were equal in price to the previous sale. Demand was aided by the small percentage of heifers offered.

DF&TM Foat, Woodside, sold 16 Angus heifers for $1250, and there were many sales exceeding $1000 seen. These heifers equaled 382c/kg, and there was a few pens sold that equalled more than 400c/kg lwt. 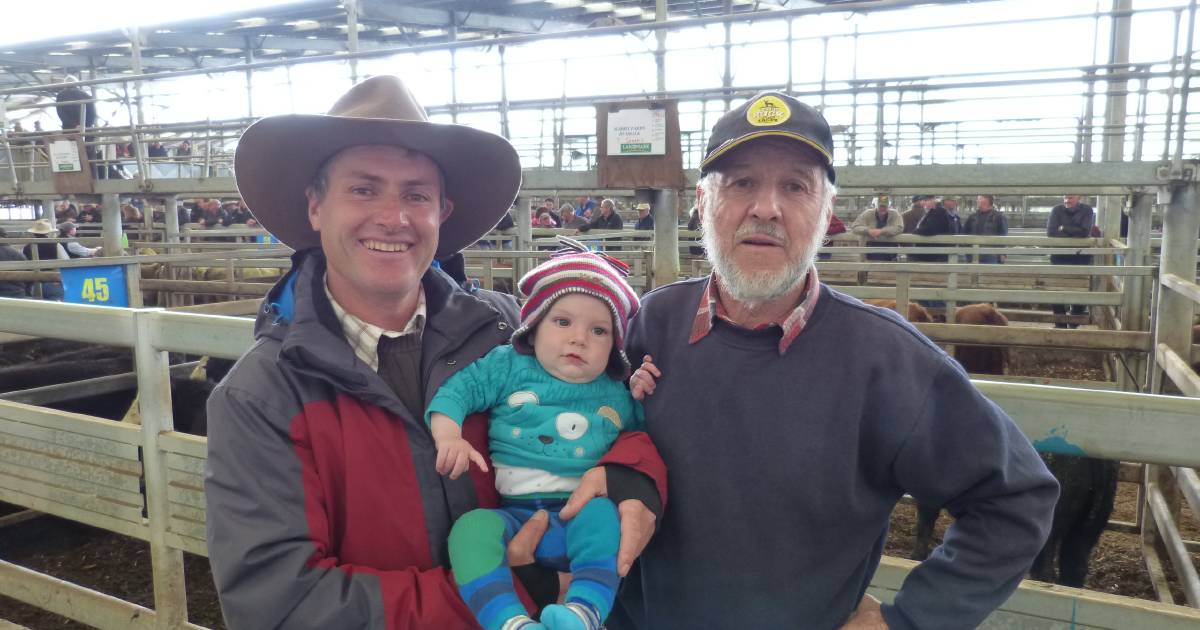 Three generations of the Harris family from Dumbalk, South Gippsland, were Shane (left), Charlie and Adrian, sold steers at Leongatha in a very strong sale. Their 65 Angus steers, 11-12 months, sold from $1410-$1690, peaking at 477c/kg lwt.