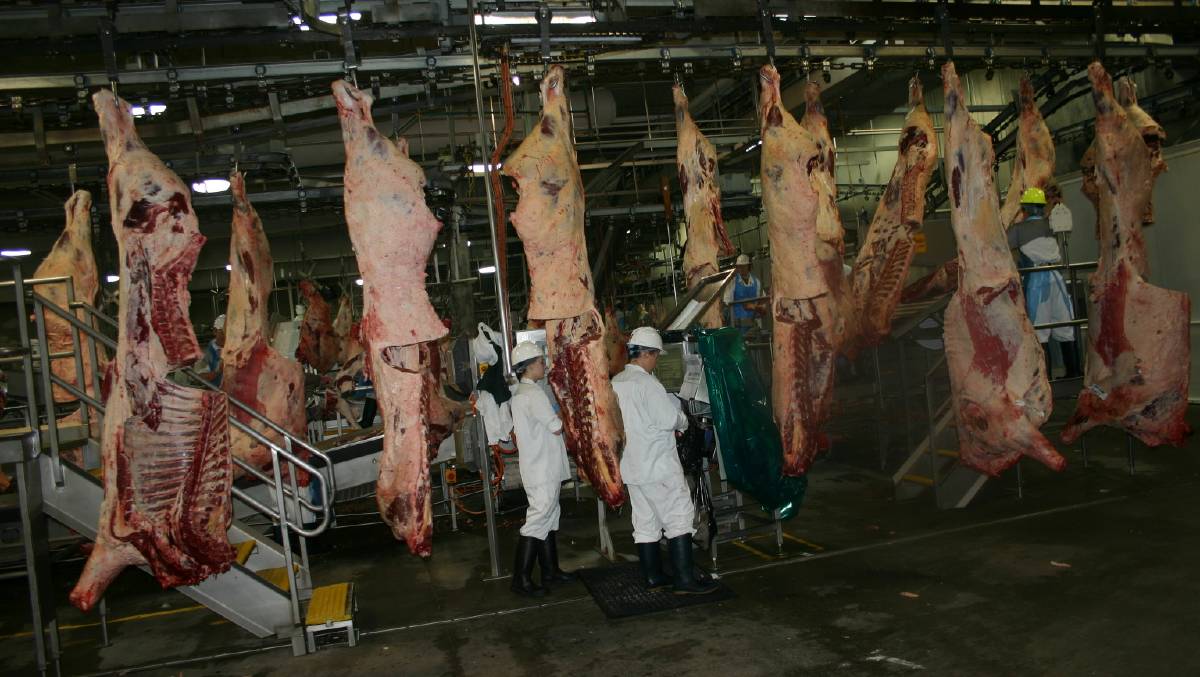 Extremely heavy costs are being imposed on meatworks at the moment, industry leaders say.

Beef processing plants are cutting back more slaughter shifts with throughput numbers on the eastern seaboard now down about 20 per cent year-on-year.

Beef processing plants are cutting back more slaughter shifts with throughput numbers on the eastern seaboard now down about 20 per cent year-on-year.

The abattoir slowdown comes as grid prices in NSW and Queensland continue trending up marginally across most categories, although in Victoria - where some plants have stopped processing entirely - the over-the-hooks indicator held firm or eased this week.

The National Livestock Reporting Service said some contributors in Victoria lowered quotes by as much as 20 cents a kilogram carcase weight this week.

Processing industry representatives said the majority of plants across Eastern Australia were not securing the numbers of cattle necessary for full kill weeks.

Citing the need 'to get export customers to pay more money for beef' Bindaree Beef in northern NSW has taken the decision to reduce its kill by 50 per cent over the coming few months to restrict supply and attempt to increase prices.

The majority of export processors are now believed to be only working three days.

Australian Meat Industry Employees Union federal secretary Graham Smith said it was difficult to quantify the extent of cutbacks but it was certainly widespread geographically.

Queensland, Victoria, Tasmania and South Australia were worst hit, with cutbacks ranging from one shift a week to three-week shutdowns, he said.

The situation was having a huge impact on regional economies, he said.

“Bordertown Meatworks on the South Australian/Victorian border, for example, is down 120 employees at the moment,” he said.

“In a town with a population of 2000, that is massive and that story is being replicated around the country.

“Some of those workers are moving out of town with their families, some are sitting back waiting but of course haven’t got money to spend.

“When you take those sort of wages out, regional towns - some of whom rely solely on meatworks - are suffering.”

The cutbacks are far from exhausted, Mr Smith believes.

“The problem is it will take at least 12 months to restock the national herd - we’re thinking we haven’t seen anything yet,” he said.

The Australian Meat Industry Council’s national director processing Steve Martyn said given as many as 40,000 head a week were no longer going through meatworks, rebuilding processing capacity when the supply dynamics shifted would be a huge challenge.

“The real issue is that boom and bust has been an aspect of this industry for a long time,” he said.

“Because of climatic conditions, lots of animals will come forward at one time and then on the other side - where we are now - there are not enough animals to maintain output at efficient levels.

“Extremely heavy costs are being imposed on meatworks at the moment.

“If we could shift towards a smoother cyclical pattern it would benefit the whole supply chain.

“That is why the beef industry is trying to move from commodity-based to brand-based marketing - in order to drive a more consistent flow.”

Modelling by leading market analysts Mecardo suggests processor margins during June were in the red to the tune of a monthly average loss of $63.80 per head.

An analysis piece by beef market specialist Matt Dalgleish, due to be released tomorrow, says processor margins staged a brief blip into the black during May but the June margin figure is the lowest so far recorded this year.