While his views about egg labelling would not have received as much attention, it’s hard not to raise an eyebrow when an elected representative questions the intelligence of hens that choose to “go outside”.

So why is Senator Leyonhjelm talking about hens and their IQ?

In June 2015, the Ministerial Council on Consumer Affairs agreed to consider a range of reforms, including a legislated standard, to respond to a consumer crisis: in the absence of a binding legal definition of free-range, some unethical industrial producers are exploiting the label to cash in on the higher prices without actually investing in practices that improve the lives of the laying hens. The resulting consultation paper was a mixed bag of reforms.

Some will entrench the status quo where intensive egg production is allowed to call itself ‘free-range’.

But there are also some good options that – if amended – could finally bring certainty to consumers and free-range farmers.

As consumers we expect a food label to speak the truth. Senator Leyonhjelm disagrees.  Most people would expect that ‘free-range’ eggs come from farms where hens are not confined to cages; are provided with a nest or perch; have space to exercise and flap their wings; have not had their beaks mutilated and have access to an outdoor range. There is a common understanding upon which we can base a legal definition.

Industrial egg producers are lobbying for intensive production systems with 10,000 birds per hectare to be permitted to use the “free-range” label. The reality that Senator Leyonhjelm ignores is that without regulatory intervention consumers will continue to be deceived into paying more for eggs that don't meet their standards.

Genuine free range farmers will be under-priced and driven out of the market by industrial producers who exploit the label without providing the standard of treatment consumers expect. And the hens trapped in so-called 'free-range' factories will experience almost that same short, brutal and demeaned life as their sisters crammed into cages. Senator Leyonhjelm says hens are better off inside and not spending time on establishing a pecking order.

He conveniently ignores a century of development of understanding of animal welfare, where living out natural behaviours is now seen as critical to a decent life.

Yes, hens do produce more eggs when they are crammed into barns or cages.

And yes, genuine free range eggs will cost a bit more. But in his ideologically blinkered world, the Liberal Democrat senator has attacked the first coordinated attempt to stop the scandalous deception and exploitation of the faux free-range producers. 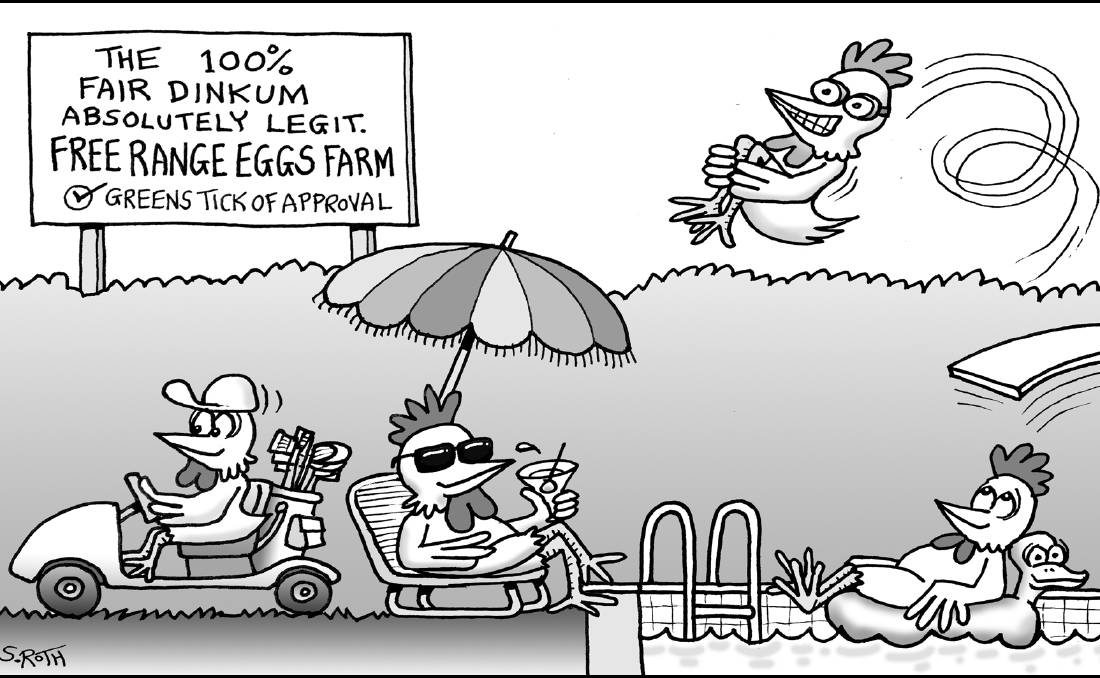 The Greens are persuaded that regulatory action is essential to bring some semblance of integrity and consumer confidence back to the egg sector.

The starting point for us is that that eggs labelled free range should come from hens that lived a reasonable life.

A threshold issue is that there is no de-beaking. The current Model Code of Practice maximum and the stocking density of 1500 hens per hectare as a legally enforceable standard would achieve this outcome.

The hens must be able to move about freely on an open range on most days.

Animal welfare is one of the issues that Australia’s feel most passionately about.

Whether it’s ending live exports, puppy farms and caged eggs, tens of thousands will take the streets, sign petitions and get involved in campaigns. Senator Leyonhjelm is echoing the industrial producers and their attempt to stop any move by the Ministers of Consumer Affairs respecting Australians who buy “free-range” eggs and the active choice they are making to not be a part of a factory-farming practice.