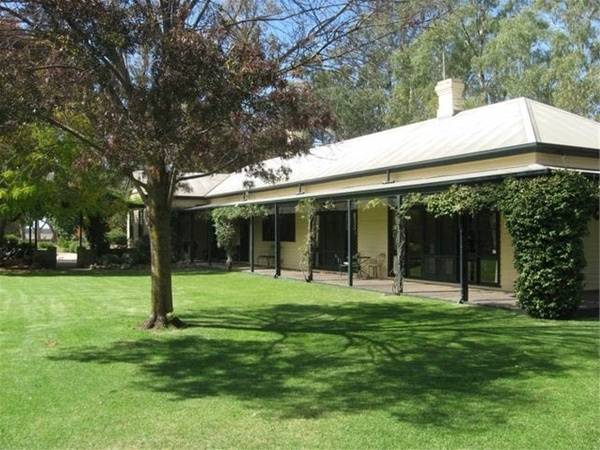 The homestead at "Madowla Park" which has Murray and Goulburn river frontages.

Government-backed environment organisation, Water for Rivers, has sold its historic Madowla Park property in northern Victoria, in the process returning almost 7000 megalitres of water to the Murray river system.

Government-backed environment organisation, Water for Rivers, has sold its historic Madowla Park property in northern Victoria, in the process returning almost 7000 megalitres of water to the Murray river system.

Water for Rivers, supported by the Federal and State Governments, originally bought the one-time rice farm for more than $25 million but last week, after returning 2800 Olympic-size pools to the environment, sold the property for closer to $10 million to a local farmer.

Water for Rivers project director, Don Jackson, who has led a land and water rehabilitation team on the property for the past 12 months, confirmed a sale had taken place.

"We think this is a terrific result," Mr Jackson said. "It just goes to show that when you do the hard work it ends up benefiting both farmers and the environment."

The 4400-hectare property at Echuca was once owned by the fallen tycoon, John Elliott, who purchased it for $4 million in 1987 and developed a sheep, cattle and yabby operation.

Mr Elliott had planned to build a resort with golf courses, hotels, condominiums and conference facilities. He used the property's extensive water rights to grow rice.

The property remained a rice-growing operation until Water for Rivers took over in 2008 and started improving environmental flows.

"What we have done here is changed the irrigation structures to make the use of the water more efficient," Mr Jackson said.

"What we are trying to do is more on-farm configuration processes in both Victoria and NSW, and there are already quite a few people interested in this."

Madowla Park no longer grows rice and will now be used for crops such as barley, wheat and canola.

"Madowla Park realised the price we were expecting to see and reinforces the fact that the investors are still prepared to buy broad-scale, versatile and well-located property," he said.

Madowla Park has frontage to both the Murray and Goulburn rivers but the key to its water entitlements, which still amount to 2000 megalitres, is that it has received an average 97 per cent allocation during the past 12 years.

He said the high level of water allocation and the new Water for Rivers infrastructure would help productive capacity and reduce the risk profile of the farm.