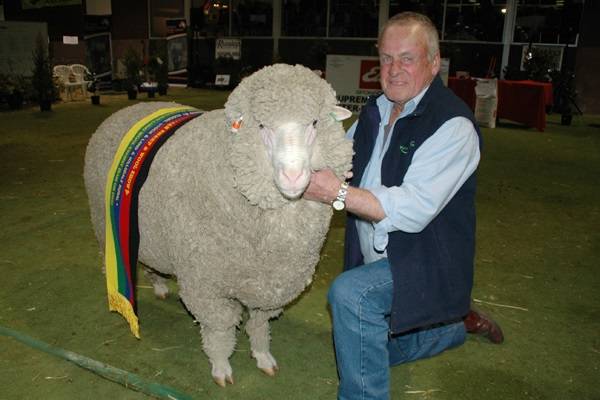 IT WAS three out of four for NSW in the supreme interbreed competition at the Australian Sheep & Wool Show, Bendigo, on Saturday.

IT WAS three out of four for NSW in the supreme interbreed competition at the Australian Sheep & Wool Show, Bendigo, on Saturday.

Stud principal Garry Armstrong said he and his family were “stoked” with the win, which capped off an excellent day where the stud dominated its breed classes.

Armdale took out the group competition three years ago and the supreme exhibit about five years ago.

Victorian judge David Jackson, Moyston, said the group of one ram and two ewes was a credit to the breed and it was hard to find groups that were as even as the winning Poll Dorsets.

“They are the sort of sheep the prime lamb industry needs,” he said.

In the prime lamb exhibit competition, Armdale’s Poll Dorset ewe beat a big line-up of champion rams and ewes from their breed classes.

David said while it was a bit unusual to settle on a ewe for the top award, the judges were unanimous and she stood out for her femininity while maintaining correctness and good muscling.

It continued a successful year for the Armstrongs, who also won champion at the Sydney Royal and NSW Poll Dorset Championships at Cowra.

The winning ewe will be shown at the Australasian Dorset Championships in September before Garry says she will head home to, “hopefully breed one to come back and do it again”.

Wattle Farm’s Jeff Sutton said it was the stud’s first win of the title, which had meant his family’s hard work and dedication in establishing the stud seven years ago was paying off.

Judge Geoff Turnbull, Wycheproof, said the group had even wool and strong carcases for 1.5-year-olds.

But by far the biggest cheer from the crowd was reserved for the supreme long wool exhibit, which was won by Geoff Kemp’s Homeleigh Polwarth stud, Derrinal, shown by Ken Arnold.

Geoff said it was the first big win with the 2yo ram, nicknamed ‘Dodger’, and was the highlight of the stud’s showing career to date.

“We thought he was a pretty good ram and good enough to be champion Polwarth but he has certainly surprised me now,” he said.

Judge Nick Cole, Camperdown, said it took an exceptional ram to win supreme interbreed classes and Dodger stood out from the other long wool breeds.