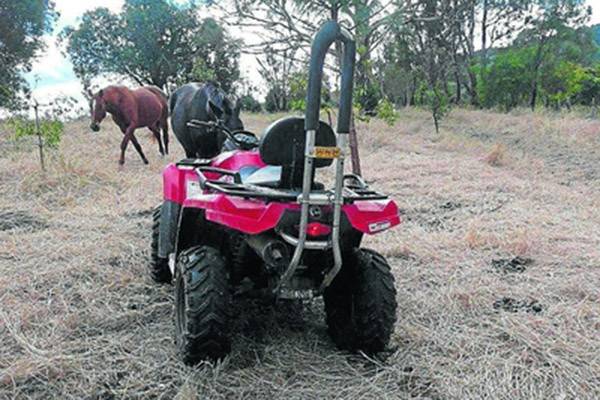 The Victorian Farmers Federation (VFF) urges farmers to take care of their families and themselves during the upcoming holiday season by taking safety precautions with quad bikes.

The Victorian Farmers Federation (VFF) urges farmers to take care of their families and themselves during the upcoming holiday season by taking safety precautions with quad bikes.

Adult-size quad bikes are covered in manufacturer warnings stating children under the age of 16 should never operate the vehicle.

“Quad bikes are a major cause of deaths and injuries to Australian farmers and their children,” VFF Farmsafe Alliance manager Tim McKenzie said. “The trauma associated with a lot of these life-changing injuries is overwhelming.

“Riders must wear helmets and other protective clothing, and farmers must make sure all quad bike riders are properly trained to use the vehicle and that the quad bikes are in safe operating condition.

Australian Centre for Agricultural Health and Safety director Tony Lower’s analysis of coronial data and hospital admissions from Victoria shows for every death on a quad bike there are another 80 who attend hospital, of which 40 are admitted.

The most serious injuries include spinal and head injuries, which have a devastating impact on the lives of the victims and their families.

“It’s vital farmers take the necessary precautions to protect themselves and their families,” Mr McKenzie said.

Fourteen Australians have died so far this year in quad bike accidents. But if the Victorian data is used as a guide more than 1000 have been injured this year.

The deal with QB industries offers quad bikes buyers the CPDs at $440, compared to the recommended retail price of $599.

“It’s good to see a manufacturer finally stepping up to the mark and offering farmers an incentive to fit CPDs,” Mr McKenzie said.

“We need to ensure every option is available to farmers, who want to protect themselves, their families and their workers.”