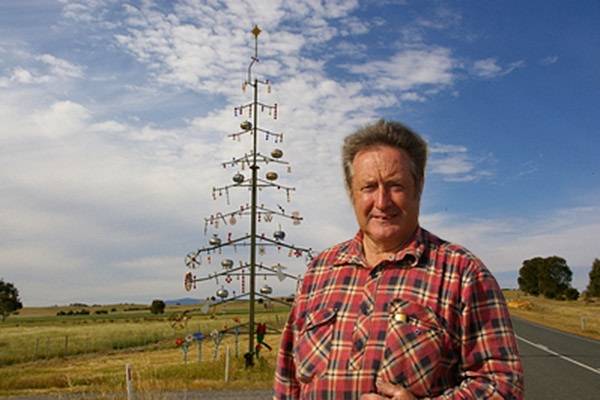 Clive Keays with his 13-metre high xmas tree that lights up at night when cars drive past with their high beams on.

But the motivation behind his roadside Christmas tree, which appears from the dark as cars drive by and illuminate the hundreds of positioned reflectors, was at least initially unrelated to the season's call to peace and joy.

"I hated pine trees," he said.

"It was 20 years ago I built my first one using a pine tree, cutting one from my property."

A fixture on the Eurambeen-Streatham Road at Crossroads for most of the next decade, it was about 10 years ago when Mr Keays converted to an iron Christmas tree, complete with decorated bike wheels - with altered spokes to attract the wind - house air vents and what he estimates to be 1500-plus reflectors.

"(The centre part) is square tube, I had it lying around, bought it for $17 at a clearing sale," he said.

"The spinners (house air vents) are the colours of the rainbow."

A welder by trade, who among other work does repairs for nearby farmers, Mr Keays constructed the 13-metre high tree himself and traditionally put it up each year, however it has been left on display for the past three years.

And he said the unique vision has attracted locals and distant travellers alike.

"International students, people from all over," he said.

"Truck drivers pull up here, at 2am, (and) go back to Ballarat and get their children out of bed to see it."

Ironically, Mr Keays is opposed to the wider use of reflectors on roadsides.

"It's why bike riders get killed on country roads their tail gate is the same colour as the reflector," he said.

"I'm a bike rider, I've changed my lights to different places and wear a reflective jacket and people still don't see me."

He said reflectors made it harder to see kangaroos on the side of the road and add to fatigue.

While drawing in those from the nearby Beaufort township and other nearby centres, the tree, best viewed at night, is designed to work best on its country road, Mr Keays said.

"It wouldn't work in town, because (there) lights have to be dipped," he said.