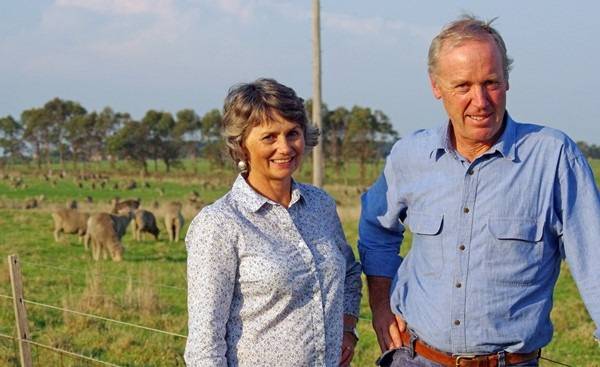 Rick and Jenny Robertson on their East Gippsland property.

CHANGE has brought rewards to Rick and Jenny Robertson of Bengworden.

CHANGE has brought rewards to Rick and Jenny Robertson of Bengworden.

Being willing to change, adapt and concentrate on what they do well, the Robertsons have seen better resilience and increased fertility in their sheep, a better lifestyle, financial rewards and awards from their peers.

Rick and Jenny Robertson began farming 24 years ago, taking over from Rick's father who bought the property in 1950 to breed Merinos for fine wool.

They also continued the family focus on land care by planting trees in the bare paddocks, started by Mr Robertson's parents and continued by the younger family.

About 10 years ago, they were forced to look at their place in the sheep industry, when the Robertsons chose to quarantine Gracemere after outbreaks of ovine Johne's disease across East Gippsland.

"I really felt for our clients, who relied on us for their stock. Rather than destroy our stock, we began vaccinating," Mr Robertson said.

They also looked at how they were farming. Mr Robertson "purposefully changed focus to fleece, frame and fertility" seven years ago.

"We thought the Merino industry as a whole had taken the eye off the ball regarding fertility and the price of wool was equivalent to the price of the carcase," he said.

"We began breeding for polled and selecting for bare breech, to eventually eliminate mulesing. We also scan young rams for eye muscle and fat."

"We feel it's better to be proactive, rather than reactive," Mrs Robertson said. "We want sheep that are doing well in the paddock, regardless of conditions."

They began incorporating Centre Plus and Kerin Poll genetics into their Merino flock, still breeding stud rams, wethers and replacement ewes but also producing first-cross lambs from the second-grade ewes.

They began an extensive fencing program, bringing their average paddock size down to 15ha.

They now run the sheep through 65 paddocks, with paddocks resting for two to three months between grazing.

"Five years ago we changed from a high stocking rate, high fertiliser and feeding regime. We reduced sheep numbers by 15 per cent and we no longer need to feed out," Mr Robertson said.

"By mobbing up the sheep into smaller paddocks, they spend less time in each paddock and we're now growing more perennials among the grasses and, overall, better resilience in the whole system."

Mobs of 2000 sheep graze for up to five days in 15ha paddocks. At lambing, these mobs are reduced to 100 to 200 ewes and graze for longer periods.

The Robertsons pregnancy scan all ewes, enabling them to separate the ewes with single lambs from those expecting multiple births and put them on to graze the pasture they need.

The extensive fencing included a laneway system to help move stock without stress; Mr Robertson only uses one dog to help him with the sheep. They have also noticed improvement in pastures.

"Perennials respond to rainfall events any time of the year and we believe set stocking is hard on perennial grasses," Mr Robertson said.

"We aim to have 100pc cover, with a really good suite of perennials responding to rainfall events when they happen.

"Rotational grazing is a big part of increasing the number and diversity of perennials.

"My criteria are, grasses have to be perennial, productive and palatable."

All these changes have resulted in reduced worm burdens, better fleece, hardier sheep and improved profit and gross margins.

"We keep the stock at no less than score 3 and the ewes now get two drenches per year, down from five," Mr Robertson said.

"Drenching is based on egg counts. I also keep 5pc of the mob undrenched and that helps build resistance.

"The wool is 19.5 micron and tensile strength averages 35 to 37. This depends on seasons, but changing to holistic farming has resulted in less breaks in the wool.

"We've seen a 6pc return on assets and an $80/DSE gross margin in the 2012 financial year. That's been our best year, helped by prices and rainfall; but it shows what genetics, price and rainfall can do."

For the past five years, the couple have used a business coach, with four consultations per year.

They credit this one business decision with a huge impact on their farming methods and attitude.

"It enables us to do strategic planning with an independent person outside the business, giving a balanced view," Mrs Robertson said.

"We've gained confidence and applied discipline to our business benchmarking, grazing charts, how we manage stocking rates and cash flow. Initially we thought it was expensive but now we see it's an important part of our business."