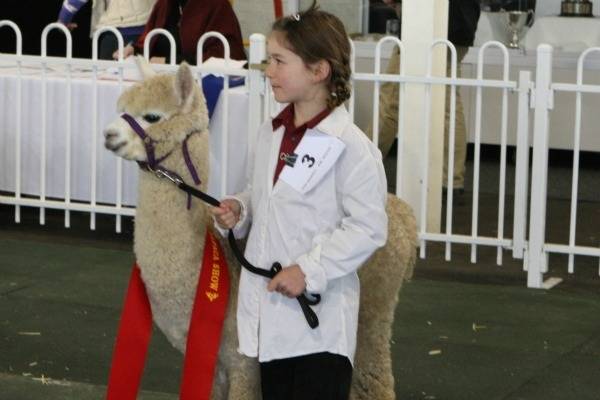 One of the young exhibitors during the Royal Melbourne Alpaca Show

And the Supreme Champion Suri was awarded to Kurrawa Ready Aim Fire, shown by Robert, Ann and Natasha Clark of Kurrawa Alpacas, Bellbrae.

The Show took place over the weekend on July 6-7 at Melbourne Showgrounds, showcasing 179 exhibits competing for two major titles.

The inaugural winner of the Dianne Condon Memorial Perpetual Cup for Best White Huacaya Female in Show was awarded to Ambersun Chandalier, shown by Adrienne Clarke and Chris Williams of Ambersun Alpacas, Mt Compass, South Australia, an award sponsored by the Friends of Dianne Condon.

RASV CEO Mark O’Sullivan was delighted with the calibre of entries and the industry’s support of the new competition format.

“The new format was well received, providing exhibitors with an enhanced experience, which resulted in a successful competition to showcase Australia’s best Alpaca breeds,” he said.

The 2013 competition was judged by Steve Ridout from Western Australia to assess all entries in the competition of Suri and Huacaya classes.

The Alpaca Fleece will be held in conjunction with the Royal Melbourne Show Sheep Fleece in September.