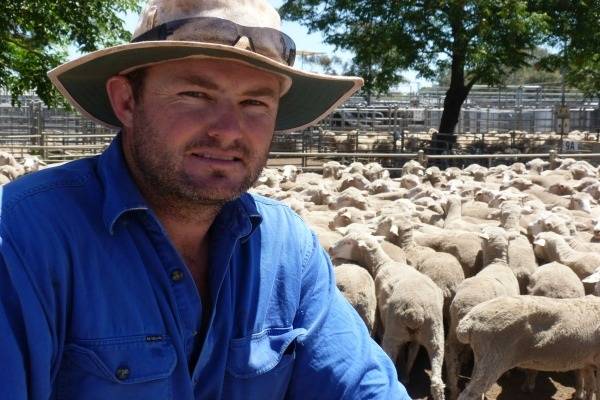 Moving away from the traditional SRS style of heavy-wool-cutting Merinos, Central West NSW producer David Greig travelled south from Tottenham in the Nyngan district to claim a B-double transport load of the Keri Keri-blood young ewes offered at Swan Hill on Friday. Paying to $161 a head, Mr Greig said his purchase was targeted to place greater focus on meat production.

WITH October completed and the Melbourne Cup run, it's noticeable the pace too has quickened in agricultural pursuits as the pointy end of the year bears down.

WITH October completed and the Melbourne Cup run, it's noticeable the pace too has quickened in agricultural pursuits as the pointy end of the year bears down.

Travelling to the Swan Hill sheep sale on Friday, there were reports of grain harvesters striking out in the State's North West, while through the central districts, haymaking was in full force due to the extensive frost damage caused in the previous fortnight.

The face of livestock sales has also changed since the rains of two weeks ago.

While falls were more extensive across the southern and eastern parts of the State, the best recorded were in the heavier livestock districts – something that will ensure a solid conclusion to the spring.

The result of this sale was much better than expected, given its lead was a 10-20-cent trashing of prime markets resulting from an uncontrollable spill of cattle from the central parts of NSW.

Victoria, fortunately, has since controlled its numbers well, courtesy of the rain, allowing the market to digest this huge flow of northern cattle which still sees markets such as Dubbo, NSW, offering 6250 last Thursday and Wagga Wagga, NSW, 4000 on Monday.

The Kerr & Co spring store cattle market (especially its fattening steers and heifers) held up remarkably strong against this negative trend of prime markets and was quoted firm to dearer than subdued store markets before the rain.

The most recent prime markets have since been able to recapture some of their lost values due to the much lower and more controlled southern supply.

The demand, too, in store sheep markets has also changed pace on the back of the rain.

Buyers from the southern and western parts of the Victoria have determined the pace, especially demand for crossbred young ewes.

On the Friday before last (October 25), the Elders Wycheproof and Corowa, NSW, breeders' sales clashed to potentially divide this revitalised competition.

However, both markets reported stronger inquiry from the south that caught most punters by surprise and boosted values to unexpected levels.

While the Wycheproof rate for young crossbred ewes stood at $150-$165, at Corowa an even more impressive top price of $208 was paid for the Bott family's Emu Park ewes (previously sold at Yarrawonga) as most of the better-presented drafts made upwards of $170.

This markedly better demand – especially in the crossbred market – paves the way for an exciting fortnight of crossbred ewe selling.

Activities commenced yesterday (Wednesday) at Bendigo, where 20,000 predominantly breeders crossbred sheep were offered by Elders and Landmark were to be dispersed (check the Stock & Land website for the results), and next Wednesday (November 13) Bendigo Independent Agents will offer another 18,000 crossbreds.

The second of the Bendigo sales will follow the next day (November 14), with a morning sale at Edenhope (11,200) and in the afternoon the Naracoorte, SA, crossbred ewe sale (18,500).

A week later (November 21) selling then returns to Naracoorte for its premier ewe lamb event, where 30,000 head have been advertised for sale.

David Hanel, Rodwells Edenhope, says with only three of its vendor lines eligible for entry to South Australia (due to that State's OJD regulations) there is a great opportunity for local south-west buyers to put away quality breeders ewes at realistic prices.

He advises almost all lines have been Gudair-vaccinated, which unfortunately is not a treatment recognised by SA under its OJD entry guidelines.

Meanwhile, new sources in the Riverina have reported the vacant Deniliquin, NSW, sheep abattoir – which has been idle since 2007 – has been sold and is expected to reopen.

The Deniliquin Pastoral Times says Victorian-based Tasman Meat Group, which previously operated abattoirs at Brooklyn, Cobram (NSW) and Yarrawonga and Yambinya feedlot near Wakool before selling out to JBS Australia, has been named as the buyer.