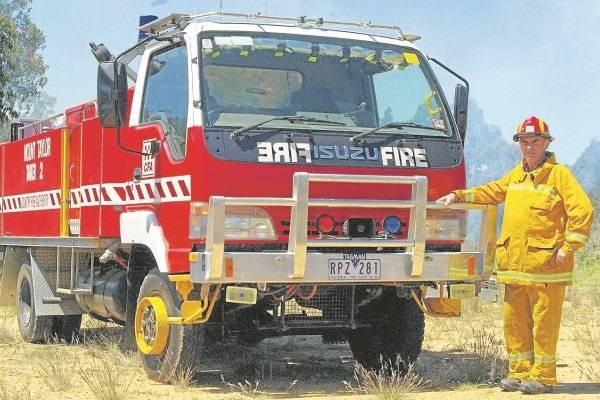 According to Captain Ken Stuart of Mount Taylor fire brigade, farmers join the CFA because of their concerns about public land management and the interface with private land.

BUSHFIRES are a natural hazard of this nation's landscape and people should expect even more frequent severe fire seasons in the future – according to a review of the bushfires of 2002-2003 by the Council of Australian Governments (COAG).

BUSHFIRES are a natural hazard of this nation's landscape and people should expect even more frequent severe fire seasons in the future – according to a review of the bushfires of 2002-2003 by the Council of Australian Governments (COAG).

However, the acknowledgement of Victoria's risk has been made again and again in successive investigations of bushfires since 1939.

What is consistently acknowledged is the need for a well-equipped, volunteer fire combat force; a bushfire preparation program that meets the needs of local communities, especially fuel reduction; issues around development of at-risk areas for urban land use; and comprehensive education of the entire population about bushfire risk.

A committee of inquiry set up after the 1983 bushfires, in referring to the 1939 and 1983 fires, stated: "Victoria is one of the most hazardous bushfire areas in the world" and stressed its climate and forests make it susceptible to major outbreaks – and that further major fires like that of Ash Wednesday 2003 should be expected.

Much has been written over the years on the fearlessness of the recommendations that came out of Judge Stretton's Royal Commission into the bushfires of January 1939.

He recommended a coordinated effort was needed to prevent bushfires and ensure protection of life and property from future bushfires.

Out of these recommendations, the Country Fire Authority (CFA) was established in 1945.

The 2003 inquiry also strongly recommended ongoing and substantial assistance to the CFA and its local brigades to combat fires "as a specialist counter-fire organisation"; and that government take the lead, through a ministerial portfolio on co-ordinating disaster response and recovery.

Yet, CFA brigades still rely on community donations to equip themselves.

After the Ash Wednesday 1983 bushfires, a Committee of Inquiry was convened by the Victorian Government and its recommendations included the need for maximum support for research to determine what vegetation management is necessary to minimise destruction and risk before, during and after a fire, including effective fuel break and roadside corridor designs.

The committee recommended introducing a system to categorise fire-prone areas, information management systems to coordinate response, recovery and relief organisations and greatly improved communication between the population and the response system.

In 2003, an Australian Government House of Representatives Select Committee acknowledged the responsibility of the government for the risks from vast tracts of crown land managed by government agencies and the need for bushfire mitigation on that land, in line with community expectations.

According to Captain Ken Stuart of Mount Taylor fire brigade, farmers join the CFA because of their concerns about public land management and the interface with private land.

He cites long-term mismanagement of public land including ignoring fuel loads in forested areas as issues of concern to private landholders.

"We do all we can to protect our assets, but when a bushfire gets going on public land … We've seen the effect too many times," he said.

The National Strategy for Disaster Resilience (2013) cited the decision in 2009 by the COAG to "adopt a whole-of-nation resilience-based approach to disaster management" based on a national co-ordinated effort to respond to and recover from incidents; with a shared responsibility between governments, community leaders, businesses and individuals.

The emphasis is on business owners and individuals to prepare for possible disaster scenarios, including volunteering within the local community for disaster management roles; and governments to be ready to provide support to community organisations implementing recovery effort.

"Disaster resilience is based on individuals taking their share of responsibility for preventing, preparing for, responding to and recovering from disasters. They can do this by drawing on guidance, resources and policies of government and other sources such as community organisations," states the strategy.

Expansion of urban development and infrastructure into hostile rural environments [forested areas] is unrealistic and "irresponsible".

The report noted individual Australians cannot rely solely on fire agencies to protect their lives and property from bushfires and need to be informed and aware of their own responsibilities on bushfire-prone days.