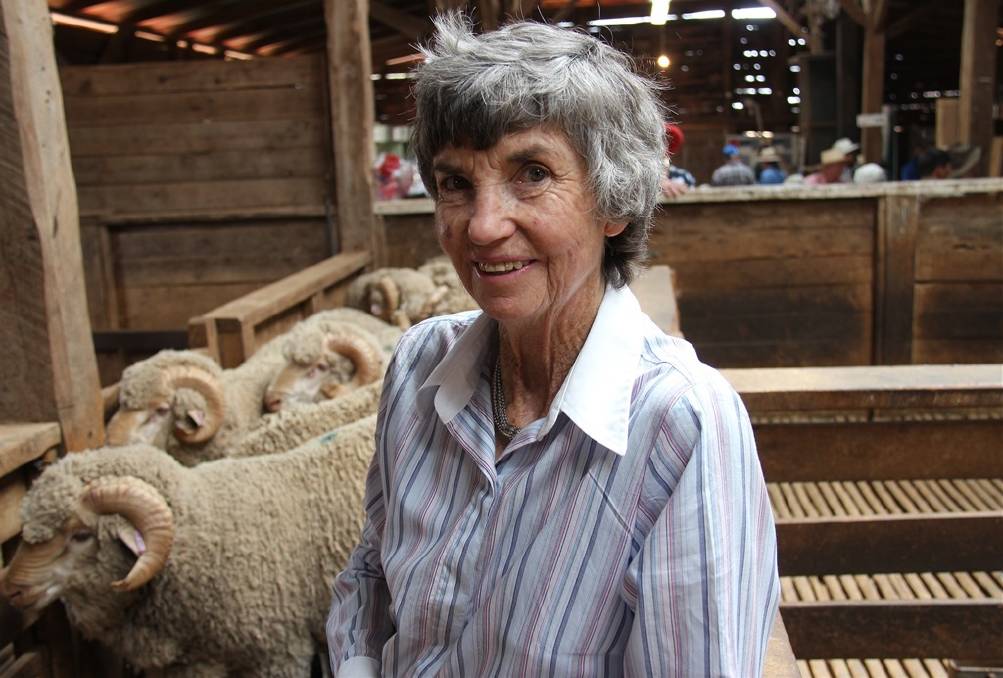 Helen Huggins took over the management of the Mulwala Merino stud in 2004.

During celebrations on the historic NSW Riverina station, Savernake, a commemorative plaque was unveiled at the woolshed to mark the foundation of the stud by the Sloane family in 1863.

The stud remains in the hands of the family today and was among the first registered in the Riverina, making it unique in the Australian Merino industry.

Visitors enjoyed a comprehensive display of historical documents and photographs on the stud's history assembled by Savernake Station owners Alex and Ann Sloane, and Helen Huggins.

"Mulwala would be one of the better documented studs in Australia, right down to letters from wool buyers and telegrams advising of stock arrivals,'' Mrs Sloane said.

A highlight was an informative account of the history and influence of the Mulwala stud by Deniliquin stud Merino breeder and historian Brad Chalmers.

The ewes had been bred by the Learmonth brothers, Groongal, Carrathool, NSW.

The sheep were walked from Tubbo to Savernake - an unfenced station staffed by shepherds who were employed to guard the flock from dingo attack. The sheep were stocked at one ewe to every two hectares.

Drought in 1864 forced the Sloane family to purchase neighbouring Mulwala Station, with its Murray River frontage, giving the stud its name.

Early sires were selected from Mudgee, NSW, and Tasmania drawn from the studs of Havilah, Ercildoun, Rawdon and Scone.

There were also infusions of the Austin Wanganella (Peppin) bloodline, but the Sloanes resisted the fashion sweeping the Riverina - the heavy cutting, wrinkled American Vermont sheep.

The 1860s was a period of unprecedented growth in the Australian Merino industry as stud masters sought to breed a superior fleece demanded by the new industrialised combing, spinning and weaving machines in England.

The Merino needed to be larger framed and more robust with improved wool quality.

James was a talented sheep man, being the first individual Merino judge at the Sydney and Melbourne shows.

The stud entered a golden era with the employment of Frank Comans as manager in the 1920s and 30s, selling up to 50 rams a year at the Melbourne, Sydney, Goulburn and Albury sales at an average of six guineas.

By that year, the Riverina had become the heartland of Merino sheep breeding, with more than 200,000 stud ewes and 35,000 rams sold each year.

In later years, Mulwala was sold to the Huggins family with the stud name changed to Woodpark, and run as a closed flock on pure Peppin blood.

In 1976, the generosity of the Huggins family enabled the name Mulwala to be returned to Savernake.

The stud has been owned and managed by Helen Huggins (nee Sloane) since 2004, and run on Savernake Station, now listed by the NSW Heritage Council.

"The stud flock is now 250 ewes with an average micron of 18 and cutting on average 6kg,'' Helen said.

Wodonga sheep classer Bill Mildren classed the Mulwala flock for more than 15 years, working with Keith and Alex Sloane, and introduced the first outside sire from Uardry in 1973.

Mr Mildren classed for broad crimping elite and semi-elite medium wools on a plain-bodied animal with an open, clean face.

Pooginook- and Tara Park-blood was introduced and, in latter years, the stud was able to participate in the Jerilderie AQ sale, selling 20-30 rams a year.

"In 2004, the average comfort factor and coefficient of variation for the Mulwala sheep were similar to today's values,'' Mr Mildren said.

Helen Huggins sells around 25-50 rams a year, mainly into Victoria, and hopes the next generation will continue with the Mulwala stud.

"The Merino industry is often unpredictable and challenging but always in the end, fascinating and rewarding,'' she said.