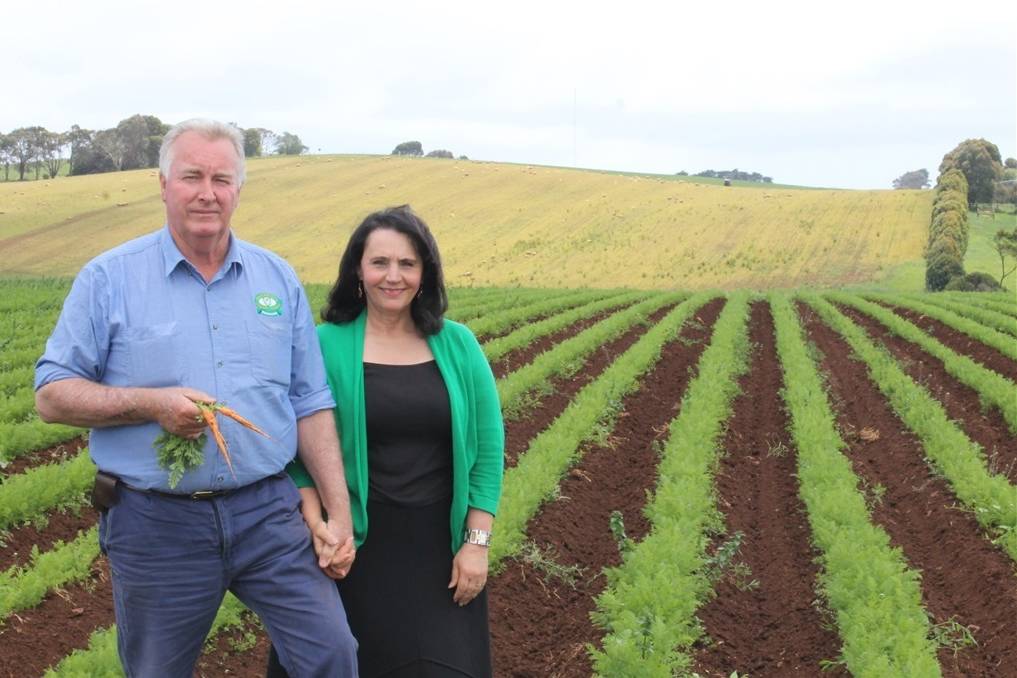 Ian and Gloria Benson in a paddock of carrots which are due to be harvested in February.

IGNORANCE has proven to be much more than bliss for Ian and Gloria Benson.

IGNORANCE has proven to be much more than bliss for Ian and Gloria Benson.

Stuck on the cane fields at McKay, North Queensland, the pair's burning desire to grow vegetables brought them to Latrobe in 1995.

"We wanted to go to a place to grow year-round vegetables, but had to learn to grow them first. We couldn't even grow a good veggie garden," Gloria says.

Four years of trial and error and a handful of goats and sheep ensued before the Benson's journey took a curious twist.

"Some of our animals, in particular the goats, were dying. I used homeopaths on our domestic animals in Queensland, so we decided to give that a try," Gloria says.

The homeopaths gradually shifted from the goats to the vegetables before the pair became one of the first organic producers in northern Tasmania in 1999.

"Fourteen years ago most people told us we couldn't do sheep organically so we bought 100 because we thought they'd die," Gloria says.

The Department of Primary Industries, Parks, Water and Environment (DPIPWE) warned them against organic vegetables, saying they wouldn't survive, according to Ian.

The first year transitioning from mainstream to organic vegetables was admittedly a tough one.

"It has been trial and error," Ian says.

Just over one hectare of carrots was grown in the first year, as the Benson's struggled to contain weeds.

"We had to get our mind around how we were going to get rid of these weeds," Ian says.

Labour costs rose exponentially but after a couple of seasons things gradually became a little easier.

"We found as we went along weaning the soil of artificial fertiliser the soil got a lot healthier and stronger and we were having fewer problems with the crops," Ian says.

"Artificial fertiliser kills the microbes and the soil and makes it harder for the soil to regenerate."

Organic fertilisers such as liquid fish, liquid kelp, granulated fertiliser and compost tea have served the pair well in recent times, allowing them to grow about ten carrot varieties with onions, beetroot, pumpkin and potatoes.

While homeopaths are used infrequently on the crops, the Benson's ewes are spared no expense, with the alternative medicine used as to vaccinate and worm.

"If you worm cattle or sheep with a chemical drench it creates a chemical imbalance in the sheep. Homeopaths lighten the burden and balance the animals' internal PH levels," Gloria says.

The crossbred ewes are sold as traditional sheep, but the distinct earthy colour of their wool born out of the organic soil makes them instantly recognizable at market.

"As soon as they hit the market everyone's after them," Ian says, who claimed a couple of pens topped the market at a local sale recently.

The unforseen growth of the Benson's operation has surprised both Gloria and Ian, who now own five separate farms in Northern Tasmania.

"It seems as though whatever we can produce the Australian market will take it," Ian says.

Produce is flown over to Malaysia and Singapore twice a week; however the pair are now struggling to satisfy overseas wholesaler demand.

"Our biggest problem is we don't have enough ground to grow the volumes they're after," Ian says.

While four years of conventional vegetable growing made the transition to organic easier than it might have been, Ian and Gloria maintain say their naivety was a blessing.

"If we'd have known too much we wouldn't have done it, it would have been too daunting. We didn't know there was a market," Gloria says.