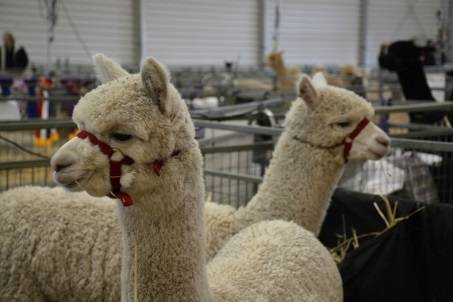 THEY come in black, they come in brown, they can even come in appaloosa and light fawn.

THEY come in black, they come in brown, they can even come in appaloosa and light fawn.

Central Victoria's top alpaca breeders are preparing their prized specimens for this weekend's Colourbration Alpaca Show in Bendigo this weekend.

The Bendigo region is home to a number of alpaca breeders, each vying for the top prizes at Australia's largest alpaca colour show.

Prue Walduck, of MillDuck Alpaca Stud at Harcourt North, said a number of new smaller breeders were expected at this year's show.

"This is fantastic - it keeps everyone on their toes and proves you don't have to have large numbers of alpacas to be successful," she said.

"It's all about the quality of your bloodlines."

MillDuck won the Supreme Brown category at last year's show, but Ms Walduck said they were not taking anything for granted.

"It depends on the competition on the day," she said.

"Breeders can breed all colours, or focus on certain niche markets.

"For example, MillDuck specialises in browns. Other studs tend to focus on a certain colours such as white, light fawn, grey or fancies."

Local breeders Yaamba of Riddell's Creek and Yenaminut from Kyneton would also look to build on their recent success at the show.

The Prince of Wales Showground's latest exhibition centre will host more than 500 alpacas throughout the three-day event, starting on Friday.

In addition to the judging of some of Australia's top alpacas, Bendigo school students will have an opportunity to test their alpaca handling skills.

Certificate II in Agriculture students from Bendigo Catholic College will lead alpacas through an obstacle course and an educational program will take place on Sunday.

The Australian alpaca industry has been keen to promote the unique animals to a younger generation, focusing on alpaca fashion.

Australian Alpaca Association national show and sale convenor Paul Haslin said Colourbration was the ideal lead-up to the most important event on the alpaca calendar in Bendigo in September.

"Where the Colourbration show celebrates the wonderful diversity of natural colours in alpacas, a few weeks later we head to our national show and sale - the pinnacle event in the Australian alpaca calendar," he said.

"A major feature of the weekend is an auction sale of 12 elite alpacas selected from across the country.

"These alpacas will set the benchmark for sales and breeding programs for the year ahead."